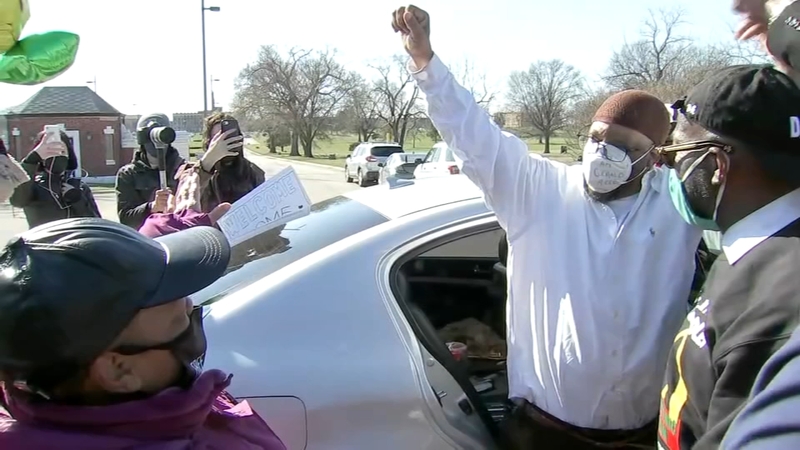 'I'm on a mission': Gerald Reed released from prison after sentence commuted

CHICAGO (WLS) -- Gerald Reed, who has served decades in prison while insisting he was tortured to force him to confess to a double murder, was released Friday after more than 30 years behind bars.

Gov. J.B. Pritzker commuted his life sentence late Thursday, which allowed Reed to walk out of a Crest Hill prison a free man.

Reed claimed he was tortured into falsely confessing to a 1990 double murder by Chicago police detectives working for disgraced former Cmdr. Jon Burge.

His 78-year-old mother Armanda Shackelford has been tireless in her insistence that her son is innocent. She said he would not take a plea deal because he didn't want everyone to think his mother is a liar.

"Whatever day he's coming home! That's the thing! He's coming home!" Shackelford said on the night her fight for her son's freedom ended. "They never had any evidence to prove that he did those crimes. The only thing they had was a signed statement that they tortured him so bad into signing."

They were reunited in a tearful reunion outside Stateville Correctional Center.

Gerald Reed, the man who has served decades behind bars while fighting for his freedom after he says he was forced to confess to a double murder, is expected to be released Friday,

Reed walked with the help of his great niece who, until Friday he'd only ever met in person during prison visits.

Reed's clemency petition attorney, Sheila Bedi, said the 57-year-old will now live with family in Naperville. He's still considered guilty under the law, and plans to fight to clear his name.

"I left a co-defendant behind. And the system was like me vs. him, and that's not right," Reed said.

Reed spent the last year in isolation, terrified of contracting COVID-19 in prison.

"It was a fight for my life," he recalled.

Now he's easing into life as a free man, ready to re-enter society with a painfully unique perspective.

"Out here is like foreign to me right now," Reed said.

Gerald Reed, who claimed he was tortured into confessing to a 1990 double murder by Chicago police detectives working for disgraced former commander Jon Burge, has had his sentence

Reed was convicted in 1990 of a double murder and sentenced to life in prison. The detectives on the case were working for disgraced Cmdr. Jon Burge. In 2018, a judge initially granted Reed a new trial, but then a new judge took over and said the conviction would stand, according to Bedi.

Reed's criminal defense attorney, Elliot Zinger, said the team has filed a motion with the state Supreme Court Wednesday night to have that new judge's ruling vacated. Zinger said he doesn't know what ultimately could happen after that, but made it clear the fight will not be over without vindication.

Gerald Reed has served decades behind bars while fighting for freedom after he says he was forced to confess to a double murder.

"He could have been out because they had offered him plea deals to let him go. And he said 'Mama, I can't do that. Because if I take a plea deal, those crimes will be on me for the rest of my life. I would make you out to be a liar. Cause that's something you don't do.'" she said.