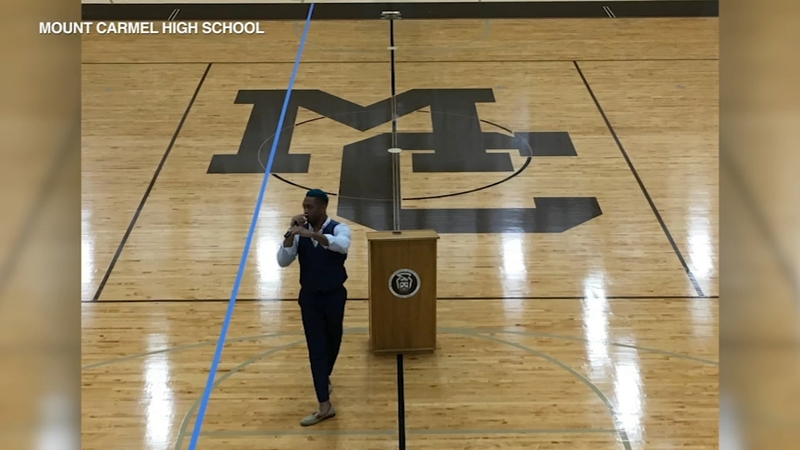 CHICAGO (WLS) -- The family of former NFL player and Chicago native Glenn Foster Jr. is demanding answers after he died Monday while in police custody at a medical facility in Northport, Alabama.

His former coach at Mount Carmel High School tells us Foster recently visited his alma mater to give back to students.

Assistant Varsity Football Coach Bill Nolan said Glenn Foster Jr. lit up the room when he walked in. A man who marched to the beat of his own drum, Nolan said Foster Jr. was willing to share his time and talent.

"This is one of their own, a guy that walked the same halls that grew up in the same streets, and came from the same neighborhoods that went to Mount Carmel and went to the University of Illinois, and then you know, made it as an undrafted free agent in the NFL," Nolan said.

It was on the football fields at Mount Carmel High School that Foster honed his love of the game. He even came back just a few months ago to talk to students about his successes and overcoming obstacles. The community is reeling now after his untimely death in the custody of Alabama authorities.

Alabama state authorities are investigating after Foster died in police custody Monday. He was arrested two days prior after a high speed chase.

He was set to be released on bail to his family when he was rebooked on assault charges after a fight involving officers in the county jail where he was being held, according to court records obtained by the Associated Press.

He was later taken to a medical center in Northport, Alabama where he died.

"Those of us who know him are devastated, we're shocked, we're dismayed, and the nature and the fashion in which he passed away obviously begs a lot of questions for a lot of us," said Rep. Kam Buckner of the IL-26th District.

Buckner knew Foster when he played in high school and came through the Illini football program.

"Why did he make contact with law enforcement in the first place? Why the choice was made to arrest him after being arrested? Why was the choice made to continue to detain him? ...Was there ever a need for medical attention? Was he denied medical attention?" Buckner asked.