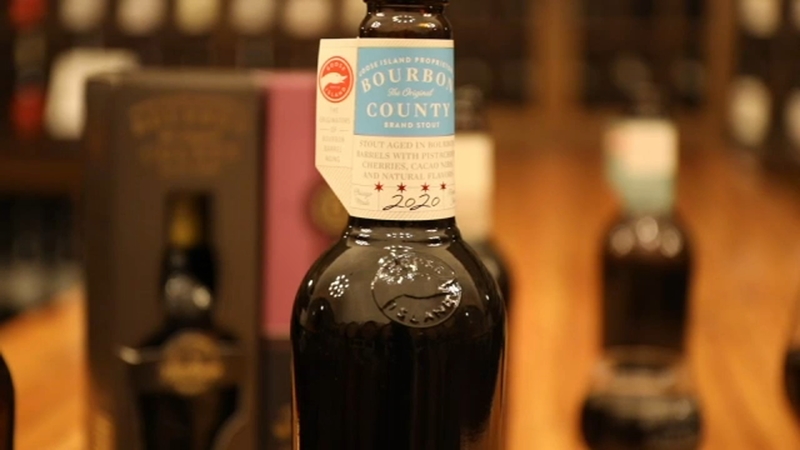 CHICAGO (WLS) -- Local beer lovers usually rally around a few events each year. One would be Dark Lord Days at Three Floyds Brewing in Indiana. The other is the release of Bourbon County Stout by Goose Island Beer Company.

The brewery just released its 2020 batch, which includes the original BCS, as they call it, plus a half dozen variants made with different ingredients. Our Hungry Hound says a bottle makes a fine holiday gift for the beer lover in your life.

Before Goose Island was bought by Anheuser Busch, it was a little microbrew on Clybourn. In 1992, Greg Hall, the Brewmaster - and founder's son - decided to make a special beer for their 1,000th batch. Nearly three decades later, Bourbon County Stout has its own cult following.

You are forgiven if you thought it was motor oil. The dark, viscous beer has been aging for some time, and now it's ready to pour. The idea of aging stout in bourbon barrels came from Hall 28 years ago.

"He made this big, big Imperial Stout. Lots of dark malts, where Bourbon County gets its color and a lot of its roasty cocoa flavors, and then aged it in a Jim Beam barrel for about a hundred days," said Mike Siegel, the R & D Manager at Goose Island.

Today, the beer ages for a year in a variety of barrels, like Heaven Hill, Buffalo Trace and Wild Turkey. They're kept in a space the size of an airplane hangar in the brewery's near West Side warehouse.

In addition to the baseline BCS, they also make six variants, like Special Number 4.

"It's got cold coffee from Intelligentsia, it's got coffee beans, it's got bourbon barrel-aged maple syrup and it's an oatmeal stout base, so it's a different base beer; it uses a toasted oat, which brings out a lot of nutty aromas and nice sweetness," said Siegel.

Other variants have Earl Grey tea and honey or pistachios and cherries. They add nuance, depth and intensity. But spending a year in a bourbon barrel also ratchets up the alcohol in your glass.

"Usually between 13% and 15% alcohol. These are sipping beers. We put them in a nice little snifter, and those aromas and flavors are really gonna pop as it warms up," said Siegel.

You can find Bourbon County Stout at either the Clybourn Brew House or their Fulton Street Tap Room, as well as in bottles in most area liquor stores. But I wouldn't wait too long as those bottles tend to get snatched up right after Thanksgiving.