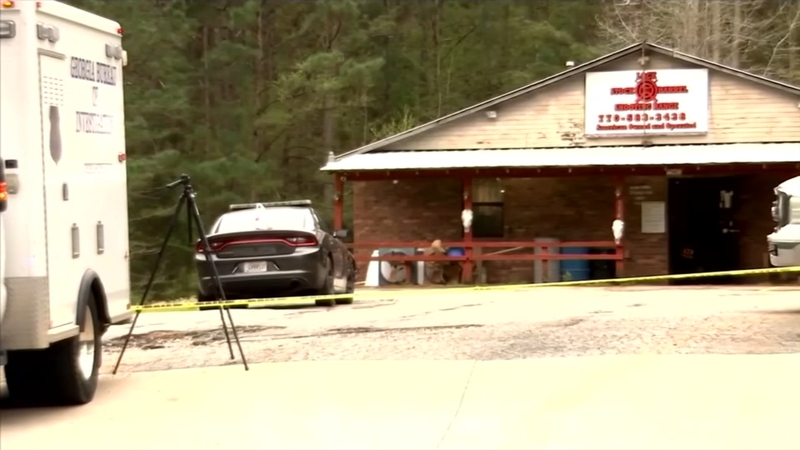 GRANTVILLE, Ga. -- A county coroner in Georgia discovered the bodies of his parents and his son, who were killed Friday in an apparent robbery at the Lock Stock & Barrel Shooting Range in Grantville, police say.

All three were shot, the Georgia Bureau of Investigation (GBI) confirmed Saturday.

The incident occurred around 5:30 p.m., the Grantville Police Department said in a statement on Facebook. Grantville is about 50 miles southwest of Atlanta.

Coweta County Coroner Richard Hawk was among the first people to arrive at the scene and discovered the bodies, according to the police chief.

The coroner confirmed the three deaths to CNN Friday evening.

Georgia Gov. Brian Kemp on Monday authorized a $10,000 reward for information leading to the arrest and conviction in the triple murder, adding to the $15,000 reward announced Saturday by the Bureau of Alcohol, Tobacco, Firearms and Explosives (ATF), which is investigating due to the number of weapons stolen.

ATF is offering a reward of up to $5,000, which will be matched by the City of Grantville and NSSF, the firearm industry trade association, according to a release from the bureau.

"The brutality of these senseless murders along with the fact that these killer(s) have acquired additional firearms make solving this case our top priority," ATF Atlanta Field Division Special Agent in Charge Benjamin P. Gibbons said in the statement.

"The GBI, ATF, & Grantville P.D. are seeking information about a robbery & triple homicide in Grantville," the Georgia Bureau of Investigation said in a tweet.

"On Friday, April 8, 2022, three individuals were shot and killed at the Lock Stock & Barrel Shooting Range on 514 Bohannon Road., Grantville, Georgia. Weapons were also taken from the scene," GBI added.

Officers were dispatched to the range shortly after 8 p.m., where about 40 weapons and a camera DVR were apparently stolen from the scene, according to police. Members of the Coweta County Sheriff's Department are also assisting.

Authorities are asking anyone who drove by the range between 5:30 p.m. and 6:30 p.m. on Friday -- who may have seen vehicles other than a white Ford dual-rear-wheel truck and a black Ford Expedition -- to contact them.