So Great, So Fragile: Climate change linked to severe weather in cities along the Great Lakes 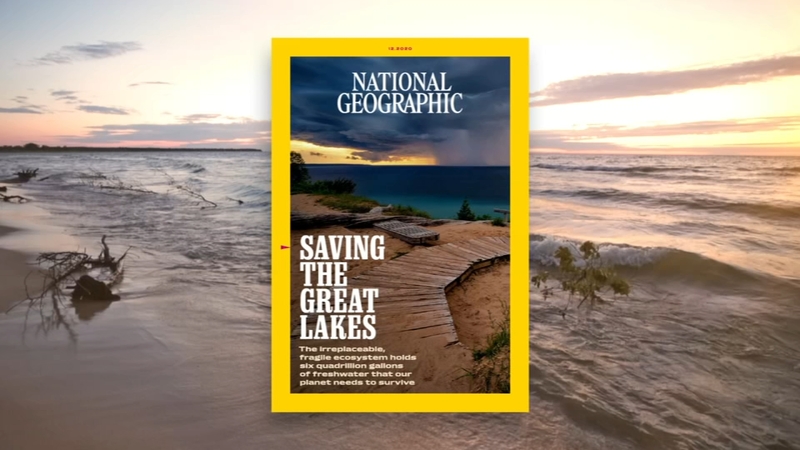 CHICAGO (WLS) -- From record heat to cold winter blasts, Chicago is no stranger to extreme weather!

2020 has seen an increasing amount of billion-dollar disasters, including the Derecho that impacted the Midwest in August. From devastating wildfires in the west to a record-breaking hurricane season, research shows extreme weather events are becoming more frequent and scientists are detecting a stronger link between the planet's warming and its changing weather patterns.

"Of thousands of scientists have signed on to the statement that the warming of the Earth is unequivocal, Meaning absolutely no question about it. And when you look at the data, you see that," said Alan Hamlet, an associate professor of Civil and Environmental Engineering and Earth Sciences.

According to NASA, the average global temperature on Earth has increased by a little more than 2 degrees Fahrenheit since 1880 and warming has accelerated since 1975.

In Chicago, three of the last 10 years are among the warmest years on record, including 2012, which was the warmest ever.

"Climate change, just plays a role in everything from the severe weather, the flooding the Chicago and other cities are seeing," Folger said. "So if we don't, if we don't address climate change, you don't really have much of a chance of, you know, handling the other problems."

The St. Joseph River is just one of the hundreds that flow into the Great Lakes.

Hamlet laid out projections and why the relationship between climate change and extremes may be one of the most difficult things to accurately quantify.

"What the projections say is that we will see increasing extreme events here in the Midwest. Extreme thunderstorms, extreme river flooding, and also heat and humidity, [which] are all significant concerns," Hamlet said. "So, for example, if we see the high-end scenario -12 degrees Fahrenheit by the 2080s, it's projected itself and in areas around Chicago as well, we'll see up to, on average 60 days per year, with temperatures above 95 degrees Fahrenheit. And currently, we have about three."

These are the changes Chicago could see over the next 50 years if Climate challenges aren't addressed, but seeing into our future is still a difficult concept to grasp.

"One of the things, I think, that will convince people also is just as it happens around them. Here we are today in September-like conditions, I don't know, I'm not normally in my shirtsleeves in the first week of November," Hamlet said. "So extreme storms, those kinds of impacts, have a big effect on people's lives and if those become more and more frequent, people will begin to accept the reality that things are changing."

In addition to rising temperatures, we're also looking at the impact of increased flooding events from extreme storms.

"We are in, across the Midwest as a whole and the country as a whole, these extreme events are becoming more frequent in places where the flooding is projected to become more extreme. It has become more extreme than the historical record. So again, we see good correspondence between what the projection say will happen and what is happening," Hamlet said.

Excessive rainfall plays a huge factor in lake levels. 2018 - 2019 were some of our wettest years on record. That rainfall contributed to the record high water levels this summer; elevated lake levels impact along the shore during storm events, including lakefront flooding and erosion.

So, water levels in the Great Lakes go up and down naturally on a cycle and what we saw this summer is a record or near-record high water.

"Which was really surprising because we actually as anybody who lives in Chicago may remember we're at a period of record low water. Just a few years ago, we saw this big jump from a trough up to a peak in a very short time, and we think that certainly that's somewhat influenced by the changing climate. It's also part of a natural cycle and so we really need to prepare for building our shorelines to be more resilient in the face of these kinds of extreme changes because they're going to be with us for a long time," said Joel Brammeier, president and CEO of Alliance for the Great Lakes.

Rising and falling lake levels, and climbing temperatures are not the only changes we're seeing when it comes to extreme weather events.

"So, global climate change does not necessarily mean warming in extreme events, it can mean extremely cold. So this is a source of confusion, but I think we expect it to get warmer. Both globally and at regional scales, but the regional scales will be noisier, as they say, the ups and downs will be more extreme than what we see on a global scale," Hamlet said. "It's also projected that weakening Jetstream, and an unstable polar vortex will bring us arctic air outbreaks. So our projections suggest that we're going to increase in lake effect snow again in an episodic way because of water warmer water temperatures less ice-covered and increased artic air outbreaks.

So we know the long-range forecast may look a little different and more extreme here in Chicago, but prevention and preparedness are key when it comes to our changing weather and its impacts on our Great Lakes.

"I think if we don't, if we don't invest in this, we are going to suffer. You know this idea that we should focus on short term gain, and ignore long term pain. Bad plan and I think we have lessons here from the pandemic as well. Those countries who acted early and decisively avoided the worst impacts later. Climate change is exactly the same. The longer we wait, the more painful it is going to be for us later if we do not curb these impacts," Hamlet said. "I think betting against humanity is not a good bet. I think we are pretty resourceful, and as many people have said you know as if you're sitting on the beach and the water's coming in, you're not just going to sit there and let the water engulf you, you're going to move back right you're going to take action and get out of the way. And we will certainly see that too. I mean, people are not just going to take it they're going to adapt. And we are very adaptable, we know how to do that."