So Great, So Fragile: Great Lakes shorelines eroded, washed away after years of high water levels 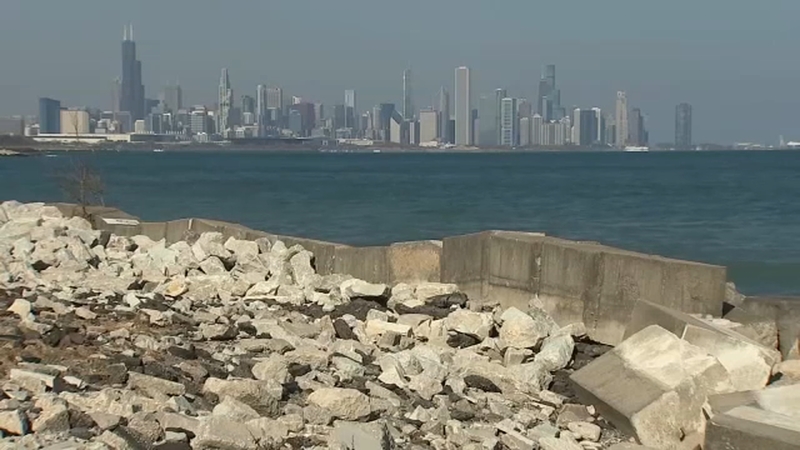 Beaches are being washed away, homes flooded, and treasured recreational spots have been reduced to rubble.

"You know, the city of Chicago has a world class lakefront. It's a park all the way up-and-down, and it should remain that way," said Michael Padilla, project manager of the U.S. Army Corps of Engineers. "And I think that we need to protect it and make sure it doesn't unravel."

Repairs along Chicago's shoreline have been ongoing since the 1990s, the mission of the Chicago Shoreline Project, which is a partnership among the Chicago Department of Transportation, Chicago Park District and Army Corps of Engineers.

Damage and erosion along the Great Lakes' shorelines isn't hard to spot. Some of the most extensive damage is on display in Chicago, on Lake Michigan's beaches.

Several years of very wet conditions across the Great Lakes Basin have played a major role in the increase in lake levels. Lake Michigan's water level has risen nearly 5 and a half feet over the past seven years; a remarkable jump from 2013, when levels were at an all-time low.

In 2020, Lake Michigan had eight consecutive months with record-high water levels. Lake levels over the summer were just under 2 inches shy of the all-time record high set back in 1986.

Data show Lake Michigan's water level has been above average now for 77 months straight, and consistently rising year after year since July 2014.

The long range forecast for Lake Michigan water levels indicates lake levels will remain above average for at least the next three years.

Near-record-high lake levels have caused scenes of destruction up and down the Chicago lakefront. The Army Corps of Engineers are working diligently to protect the shoreline.

"And so this was one of them that we saw in the proximity. Lake Shore Drive is very close, and you just don't want it to continue to unravel as you know, some storms has such great intensity that, you know, 10, 20, 30 feet can start to erode and then another storm comes along and it just starts eating its way towards Lake Shore Drive," Padilla explained.

According to CDOT, 9 miles of the lakeshore have been repaired with about a mile and a half remaining. This includes projects like Promontory Point and Morgan Shoal.

"Also you can see the concrete blocks farther down that were installed all the way down this way," Padilla said. "The city of Chicago came up with some additional funding, and so, in a couple of weeks, we're going to put more rock in here just, you know, just to bolster it up through the winter."

A temporary plan is in place, but according to CDOT, the Morgan Shoal Project could cost more than $71 million for design and construction when complete.

There is a special emphasis on this area to protect the city, the drive and something special that lies beneath the waves.

"Now, it may sound crazy that we're talking about coral reefs in Chicago, but if you go back in time 425 million years, Chicago was not in the same place that it was here today," explained Phil Wilink, fish biologist at the University of Illinois. "It was actually south of the equator, and this entire area was a shallow tropical sea, full of all kinds of bizarre marine life, and there are scattered coral reefs all over the place. So it's an ancient coral reef. It also happens to be right next to Lake Shore Drive. Tens of thousands of people are driving past it every day, and hardly anyone knows that it's there or even pays attention to it."

Wilink has been studying Lake Michigan for decades, and spent many years of his career at the Shedd Aquarium, where he discovered the significance of Morgan Shoal.

"Here at Morgan Shoal we have basically a natural breakwater. So if we see how Morgan shoals are formed, and we take those lessons and apply it to the breakwaters, we could create structures along the cities like that one, protect the infrastructure of the city, can also increase the biodiversity of the city, which would then be a win for the inhabitants of Chicago and a win for the inhabitants of Lake Michigan," Wilink explained.

Heading north up the shore, a new technique is being put in use to repair the damage left behind by winter storms and lake Michigan's fury.

"So what you're seeing behind us is what's called a trap bag system," said Heather Gleason, director of planning and development at the Chicago Park District. "They are essentially really large sandbags, but you don't have to fill them with sand so the ones that you're seeing here are actually filled with pebbles or rocks to make it a little more stable, and the idea is that it breaks up the wave action, and it is intended to be temporary so we don't think the lakefront will always look this way but while the water levels are high. It's a way for us to be able to do repairs and still allow people to use it once we're done. You know, so that we can make sure the lakefront accessible to everyone."

Now it's a race against time to make sure work is complete as the city braces for another Chicago winter.

"Every winter the lake does some damage to the lakefront trails, so we usually have a big repair project in the spring. So a lot of the repairs that we did this spring were more on the bike path, and but once we saw how much damage was done at this level on the pedestrian path and near the beach edge. We knew we had to do a bigger solution," Gleason said.

"Residents need recreation and open space, but the lakefront is actually also a really big economic driver for the city, so if you think of all the festivals and events and concerts and the air show and things that bring in tourists to the city of Chicago," Gleason said. "It's jobs, it's, you know, making sure that our city is healthy, from an environmental standpoint, you know, we want to make sure this is our water source. So all those things come into play and just make the lakefront and the shoreline a critical resource for all of us."
Report a correction or typo
Related topics:
weatherchicagohyde parkloopkenwoodrogers parkmuseum campusbeacheswater conservationbeach erosionshedd aquariumgreat lakeslake michiganscience
Copyright © 2022 WLS-TV. All Rights Reserved.
GREAT LAKES
Chicago surfer saves 3 swimmers caught in rip current in Lake Michigan
Shedd Aquarium celebrates 'Plastic Free July'
Chicago's 'Great Lake Jumper' makes 365th leap
Endangered birds expecting new chicks at Chicago's Montrose Beach
TOP STORIES
Bitter, dangerous cold moves into Chicago area
Aurora woman honored for tireless work to help homeless
2 suspects linked to 8 armed robberies, carjacking on NW Side: CPD
Bears hire Ryan Poles as new GM
School Closings: Chicago Area Complete List
75 years after Al Capone's death, it's not your dad's Chicago Outfit
Death of ISP trooper, wife ruled a murder-suicide
Show More
Man denied heart transplant because he has not received COVID vaccine
Chicago Weather: Sunny, very cold Wednesday
Apple CEO allegedly stalked by woman who showed up at house
Original 13th Amendment on display in Chicago for Black History Month
St. Charles woman sues after attacked by neighbors' dogs
More TOP STORIES News