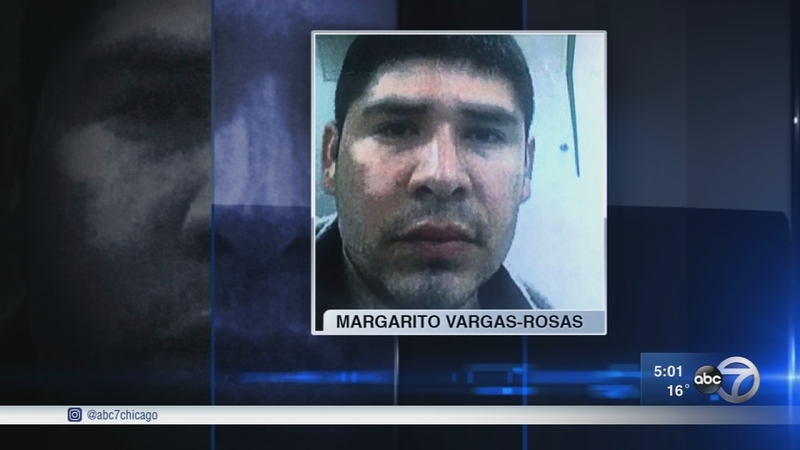 WADSWORTH, Ill. (WLS) -- A 33-year-old Chicago man has been charged after he allegedly made threats against fellow passengers aboard a Greyhound bus Friday night.

The suspect, identified as Margarito Vargas-Rosas, was taken into custody on I-94 in Wadsworth, Ill. The ordeal started near Milwaukee when police said they got a call from someone on board the Greyhound bus. The caller said a man was acting crazy, claimed he had a gun and threatened passengers.

Police pursued the bus, which crossed over from Wisconsin into Illinois. Illinois State Police tried to use stop sticks to pull the bus over and the driver finally complied and the pursuit ended just north of Route 173.

"He was acting crazy. That's what it boils down to. We tried to get him to calm down, there were four or five people telling him to sit back down, but he refused to and that's when I was on the phone with 911 begging for help," said passenger Patrick Dodd.

"The first thought in my mind was that they were escorting us, but then it's like okay maybe they're not because I see some of them pulling over and I couldn't see what they were doing. Some people said they saw them getting out of their cars, getting in the grass and throwing spikes out," said passenger Terrance Williams.

The suspect was taken into custody without incident, police said. None of the 37 people on board the bus were injured.

Greyhound passengers are safe but shaken after a scary ride into the city.

The Racine County Sheriff Christopher Schmaling said the suspect implied he had a gun, but no weapon has been located. The sheriff said the suspect has been charged with terroristic threats and disorderly conduct and is being held in Lake County, Ill.

I-94 was closed while police investigated before re-opening around 1:15 a.m.

A Greyhound spokesperson said in a statement, "The safety of our customers and employees is the cornerstone of our business. With security measures in place such as having security guards and surveillance cameras at many of our stations, random searches of customers' carry-on baggage, DriveCams on the buses, as well as working with the TSA on the development of some of our security programs and procedures, we do our best to ensure our customers are safe when they travel."

The spokesperson said Greyhound is fully cooperating with authorities to investigate the incident.

Police surrounded a Greyhound bus after an incident involving a possible gunman on I-94 at Illinois Route 173, Illinois State Police confirmed Friday.