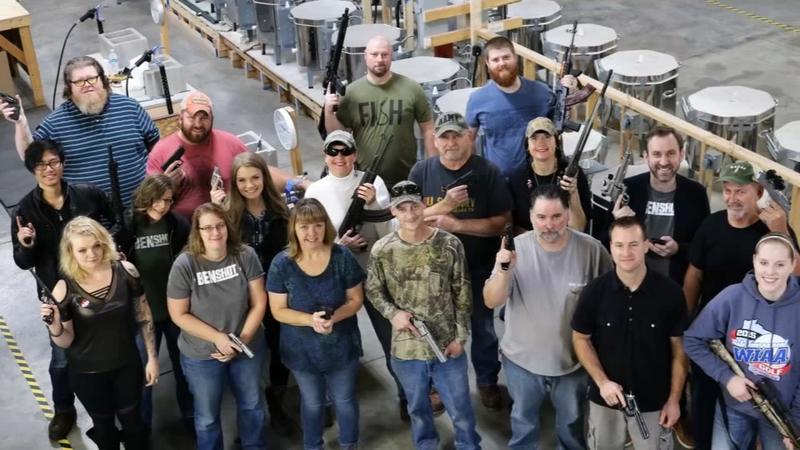 HORTONVILLE, Wis. -- A Wisconsin company is giving employees revolvers for Christmas in what it said is an effort to promote personal safety and team building.

Ben Wolfgram is co-owner of Hortonville-based BenShot. The company makes novelty glassware embedded with a bullet to make it look like it's been shot.

"We had a company meeting. What we did was ask people to go to a local gun store and find a gun that they wanted and we got a gift card for that gun so we could purchase it," Wolfgram told WBAY.

"We wanted to give a gift for personal protection and safety and also something that was memorable and fun for the employees," Wolfgram said.

He has 16 full-time employees, some of whom have never fired a gun. Wolfgram said most workers were excited.

At least two initially declined the guns, but are considering accepting them after taking a gun-safety course that executives required.
"It took about half a day. She came in and had a complete gun safety course with us. All of us got certificates saying that we completed," said Chelsea Priest, BenShot's marketing and public relations manager.

Priest said each employee had to go through the normal process of purchasing a firearm.

"I had to do the full background check, everything and that process was completely done by the store that sells the firearms," Priest said.

She said the gift is a bullseye in demonstrating the company's values.

"I was not surprised. It's very obvious that our company stands for the second amendment - look at our products," Priest said. "Our company supports law enforcement, military and everything like that. So kind of just the whole basis of our company is the American tradition style. "
Wolfgram said he's not worried about workplace violence. He said he will have an armed staff, which he called "pretty good."