See all of Heidi Klum's iconic Halloween costumes over the years

We're paying homage to the Queen of Halloween with a look at all of her legendary costumes from past years.
OTRC 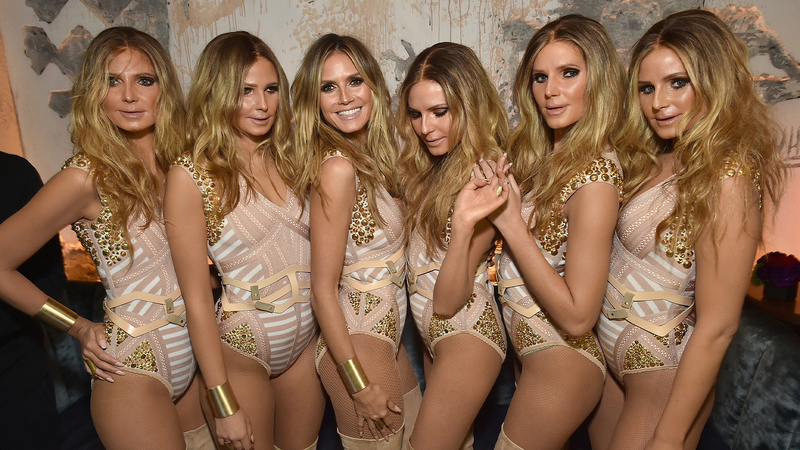 The countdown to Halloween is on and to celebrate, we're turning our focus to one of the most iconic celebrities that reigns over this holiday: Heidi Klum.

It's no secret that the supermodel goes all out year after year, usually sprinkling hints about her costume across her social media pages leading up to her annual Halloween bash.

2019: A gory alien/cyborg
One thing is clear about this costume: It was Klum's most terrifying yet...even if we're still unclear on what it was.

2018: Princess Fiona from "Shrek"
Another stellar use of prosthetics from Klum. The costume was made complete with her husband Tom Kaulitz dressed as Shrek and a stroller with ogre triplets.

2016: Heidi Klum (clones)
Now this Heidi is recognizable! Or should we say Heidis? The supermodel's full ensemble was comprised of herself and five other look-a-likes dressed as Victoria's Secret Angels.

2015: Jessica Rabbit
Klum is no stranger to using prosthetics for her costumes, and this was yet another example of how she underwent a dramatic makeover to transform into the cartoon character.

2014: Butterfly
The supermodel lit up Times Square with her colorful ensemble, complete with giant wings, a rainbow bodysuit and body paint.

2013: Old Lady
Another impeccable makeup job on Klum, who was unrecognizable at her party. She had the works done -- wrinkles, varicose veins, dark spots and all.

2012: Cleopatra
Klum was stunning as the Egyptian ruler and dawned an intricate golden headdress.

2011: Human Body
Are we at a Halloween party or the famous Bodies exhibit? Klum was rolled out onto the red carpet on a gurney by gruesome-looking doctors.

2011: Apes
Two Halloween parties means two costumes for Klum, and she attended this one with a look inspired by "Planet of the Apes."

2009: Crows
These birds are widely recognized as symbols of horror, so Klum and Seal attended her annual Halloween bash in full-on crow bodysuits.

2008: Kali
Klum dressed as the Hindu goddess of death and time, sparking allegations of cultural appropriation. Her costume included six additional arms and several heads attached to her body.

2007: Cat
One of Klum's simpler costumes over the years was a form-fitting cat body suit. Of course, Klum added body paint and rhinestones on her face to make the ensemble pop.

2006: Forbidden fruit
The supermodel hid her baby bump while in an Adam and Eve-inspired apple, with green body paint and a serpent wrapped around her.

2005: Vampire
Klum went with big hair and a bleeding heart for her vampire costume.

2004: Witch
With a flaming red wig, dress and hat, Klum tacked a skeleton on her back as an added accessory.

2003: Golden gladiator
This is another widely debated look -- is Klum a gladiator, goddess or alien? Regardless, the supermodel rocked a form-fitting metallic golden ensemble.

2002: Betty Boop
Klum dressed as the iconic flapper in her first foray into cartoon character costumes. The key to her look? Betty's long lashes, of course.

2001: Lady Godiva
The supermodel made her grand entrance on top of a horse for this costume, complete with a long blond wig, bejeweled white spandex suit and, of course, a hint of fake blood.