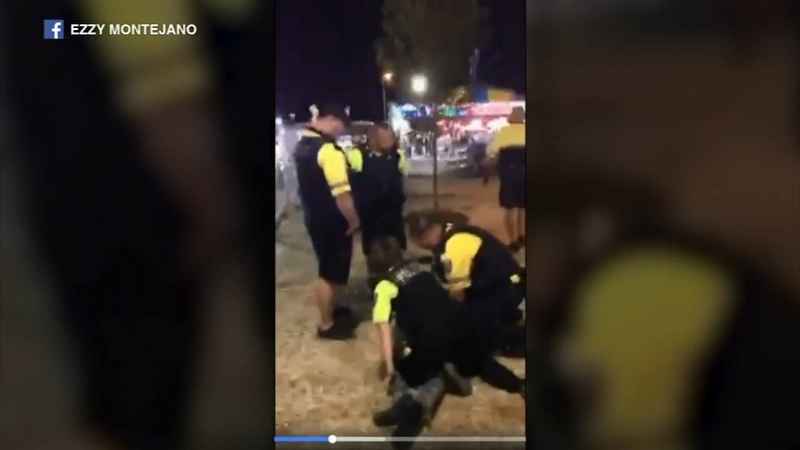 HAMMOND, Ind. (WLS) -- Hammond police said a 15-year-old boy was restrained and choked after making contact with an officer, but the teen and his family said the officers went too far.

"The second they threw Dominic on the ground my oldest son Carl called me: 'Mom, the police are beating up Dominic,'" Elizabeth Montejano said.

Dominic Garibay and his brother said they'd walked out of Festival of the lakes Wednesday night to meet their mom and saw a fight between two girls. The girls were surrounded by police. So, he said, they walked up to see.

"Our officer said 'Get back, stop playing games, get back.' In an attempt to keep the crowd back, he had his arm out and this young man slaps away the officer's arm," said Hammond Police Lieutenant Steven Kellogg.

"He didn't try to swipe away their arm. When the officer grabbed him right here Dominic grabbed him. 'What are you doing,'" Elizabeth said.

"I think it just went to physical right away. He didn't say anything to me," Dominic Garibay said.

From there, Dominic said it escalated quickly.

"Once he started choking me I was trying to break free because I couldn't breathe, I was just trying to get air," Dominic said.

Elizabeth walked up to find her 15-year-old son pinned against the ground as police. At that point his brother started recording on his cell phone.

Police said their body cameras show what happened before that.

"I see an aggressive young man and I see a lot of officers saying, 'Relax, calm down, cool it, stop resisting," said Kellogg.