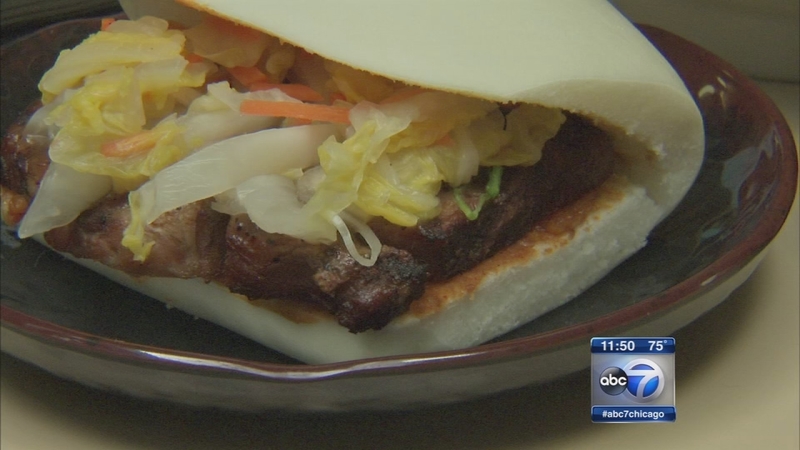 WESTMONT, Ill. (WLS) -- Finding a Korean restaurant in the western suburbs is not an easy task, but there is a real gem in a Westmont mall surrounded by Chinese kitchens.

Hanbun is not a typical Korean restaurant either, but rather, a chef-driven lunch-only concept that takes a more thoughtful approach to Korean cuisine.

The International Mall in Westmont is loaded with several Chinese options, even some Taiwanese dishes. But the diminutive Hanbun stands apart.

"There was nothing like it out here, and I think Korean options are really limited out here, and I wanted to bring a chef-driven idea to a food court essentially," said owner David Park.

His deep-fried rice cake skewers are a childhood memory throwback. Brushed with spicy-tangy gochujang and then topped with puffed amaranth seeds, they're unlike anything you'll see on Lawrence Avenue.

"And I thought the puffed amaranth might give it a nice, nutty crunch with a little bit of bitter spice behind it," said Park.

His pork buns may be inspired by Momofuku in New York, but his pieces of pork belly are brushed with coffee, soy, sugar and black pepper; tucked into puffy gua bao buns with scallions and white kimchi, they pack a whollop in a small package. Even his regular kimchi, offered as a side dish, stands out. Is it authentic? Sure. But that's not the point.

"Authentic to us, but not traditional. I wanted to take the ideas of my childhood memories and then kind of influence them a little bit by what I've gained throughout my years in Korea," he said.

You can certainly find serviceable dumplings and soups and noodles here in the International Mall, but if you want to have a taste of Korea that's unlike anything you'll find in the city, you gotta gravitate toward Hanbun.