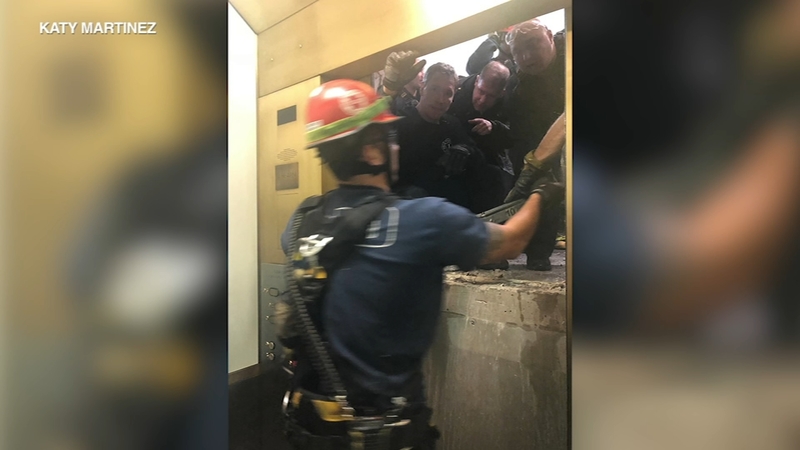 CHICAGO (WLS) -- You may have been on one of those speedy elevators in the building formerly known as the John Hancock Center. The I-Team learned what inspectors said really happened the night an elevator rope broke in the 100-story iconic skyscraper.

The initial accounts were unsettling; widespread reports that Elevator Two at 875 North Michigan Avenue, formerly the Hancock Center, had "plunged" 84 floors in November of 2018.

The I-Team obtained the final report, which says one of seven steel hoist ropes "broke," but that there was no "plunge" from the 95th floor. Instead, the report says there was a "gradual lowering" from the 20th floor to the 11th floor before all six passengers were safely rescued. A hole had to be cut through a wall because the express elevator doesn't have an exit on each floor.

"The summary says that all the safety mechanisms that were supposed to work, worked," said Judy Frydland, Commissioner of the Department of Buildings. "These elevators have a log of redundant features for safety. So each one of the ropes can hold the elevator on its own, but there are seven ropes. One of them failed, the other six were perfectly fine, the elevator came to a controlled stop a few floors below."

Frydland said she and her staff reviewed the report, submitted to the city from the Otis Elevator company. It says "...elevator #2 was never out of control or unsafe..." and that "...the elevator's backup safety brake never engaged, indicating the elevator never traveled at an unsafe speed."

The report notes that the ropes were last replaced in 2015 and that there was no indication the rope needed repair or replacement prior to the event.

But annual inspections to check potential problems in many elevators are conducted by private third parties, not the city.

It's called the Annual Inspection Certification Program, and includes several hundred high rises, all of the ones in the central business district, and others which may qualify outside of downtown. It's all to cut taxpayer spending and increase efficiency.

"It's not an honor system because they have to certify it, they have to do the annual inspection and they have to send us a report," explained Frydland. "We do audits, we do go back out there and we do keep track of the ones that don't do it, because if they don't do it we file an enforcement action against them."

But Frydland said the city's eleven inspectors do perform other independent reviews of downtown elevators if people complain to 311. And she said the Department of Buildings inspects every new elevator and modernization of an elevator in the entire city.

Under the freedom of Information Act, the I-Team found that audit inspections, in 2014 and 2017, failed two different elevators at the former Hancock. The city said there were no records available and no tags on the equipment showing an annual, independent test had been completed. In both cases the city said the building was able to prove tests were completed when representatives appeared at hearings.

Can third party inspections be trusted?

"I want people to know that there are a lot of features, a lot of systems in place to make sure that elevators are safe," Frydland said. "There were seven redundant systems here, seven ropes that each individually could hold the car, to protect the people in the elevator."

The I-Team reached out to Otis and the owners of the former Hancock to see if they wanted to comment on this story.

If you know of a problem elevator you should alert building managers and call 311.

The owners of the commercial spaces at 875 N. Michigan Ave. commissioned Otis Elevator to conduct a comprehensive examination and proactive maintenance audit of all commercial passenger and freight elevators in the building following the Nov. 16 event.

The Otis study concluded that the elevator involved in the event was under control and safe on the night of Nov. 16. The safety systems operated as designed to decelerate and lower the elevator, bringing it to a controlled and safe stop.