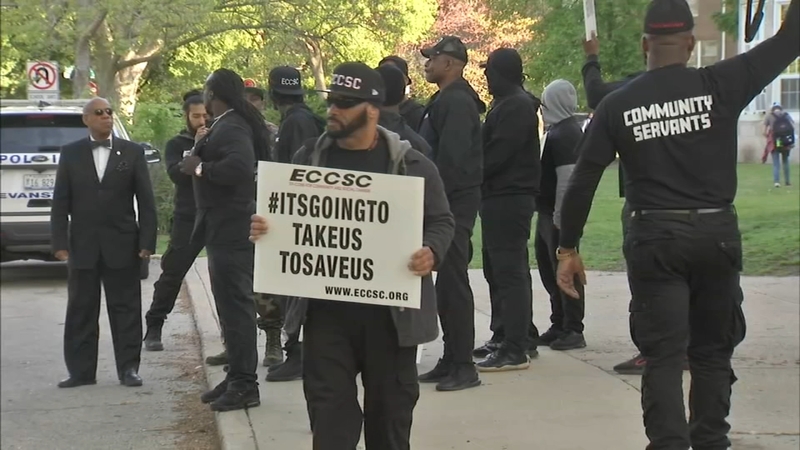 EVANSTON, Ill. (WLS) -- A protest was held at an Evanston middle school demanding transparency when it comes to what is being done after nooses were found hanging in a tree near the school.

As children arrived at Haven Middle School Monday morning, Ex-Cons for Community and Social Change were chanting their message, wanting to know what is being done about an act of hate that took place here over a week ago.

"We stand here today to say we want an immediate investigation and we want to know the transparency of that investigation," Tyrone Muhammad, executive director of Ex-Cons for Community and Social Change, said.

The violence prevention group along with some parents said they're outraged over the silence from school officials, Evanston police and Mayor Daniel Biss.

"Nooses hung from a tree should be a state of emergency," Muhammad said.

Back on May 13, three nooses were hung from a tree in between Haven Middle School and Kingsley Elementary in Evanston's District 65.

The nooses were found hours after students staged a sit-in to protest the school district's decision to transfer some teachers to different schools.

"We want a full thorough investigation," Ralph Edwards said. "We want it like yesterday. It's being brushed under the rug. It's a shame that people are still waking up finding out that there's three nooses in the community."

Edwards' 11-year-old son, Dumah is a 6th grader at Haven. He said he has been experiencing hate speech and some kids have even called the incident a joke.

"It doesn't hurt my feelings, it just makes me like wonder like why would they think that and if somebody made that as a joke then it's not like funny," Dumah Edwards said.

Parent Julie Tran hopes some action will be taken.

"I do think there should be some consequences a suspension or whatever needs to happen because obviously that's not an appropriate situation to happen in school," Tran said.

Meanwhile, protesters feel like Mayor Biss needs to respond and offer solutions. ABC7 has reached out for comment and have not heard back.