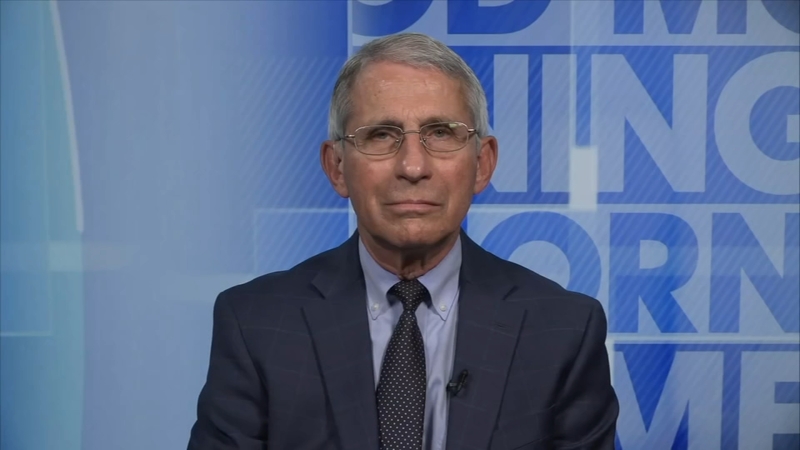 "I don't know how to address that. I'm just going to certainly continue doing my job. You know, I don't tweet. I don't even read them," Dr. Anthony Fauci said in an interview with ABC News's George Stephanopoulos on Good Morning America on Tuesday. "I just will continue to do my job no matter what comes out, because I think it's very important--we're in the middle of a crisis with regard to an epidemic, a pandemic. This is what I do. This is what I've been trained for my entire professional life, and I'll continue to do it."

A recent retweet from Trump accused Fauci, who has advised six presidents since he started working at the National Institute of Health in 1984, and other health leaders of lying to the American public.

"I have not been misleading the American public under any circumstances."

Fauci was also asked about the need for a coordinated federal response to COVID-19. He said that did exist in the form of guidelines for reopening that were released months ago.

If the guidelines are followed, Fauci said, "I think we can prevent the surges that we've seen in the southern states, because we just can't afford, yet again, another surge."

A week after appearing to project a more serious tone about COVID-19, Trump reverted back to spreading misinformation about how to combat the virus.

"I'm quite nervous about it," Fauci told the Washington Nationals' Ryan Zimmerman, who is sitting out the season for safety reasons, citing the virus.

In a series of retweets overnight, he again pushed unproven claims about hydroxychloroquine, an anti-malaria drug that the U.S. Food and Drug Administration said is not effective against COVID-19.

"I go along with the FDA," Fauci said. "The overwhelming prevailing clinical trials that have looked at the efficacy of hydroxychloroquine have indicated that it is not effective in coronavirus disease."

The president's latest push for hydroxychloroquine was part of a flurry of activity that is now getting push back from the major social media companies.

Facebook, Twitter and YouTube began scrubbing their sites of the video Monday because it includes misleading claims about hydroxychloroquine, and glosses over the dangers of taking it. But dozens of versions of the video remain live on their platforms, with conservative news outlets, groups and internet personalities sharing it on their pages, where users have viewed them millions of times.

One version of the video had more than 17 million views before Facebook took it down.

Facebook is trying to remove the video because it is "sharing false information about cures and treatments for COVID-19," according to Andy Stone, a spokesman for the platform.

Twitter also said it is working to remove the video. A tweet from the president's son, Donald Trump Jr., describing one version of the video as a "must watch!!!" Monday night was also taken down by the platform, and Trump Jr.'s account was restricted from tweeting for 12 hours.

In the video, Dr. Stella Immanuel, a physician from Houston, Texas, promotes hydroxychloroquine as a sure-fire cure for the coronavirus,. She claims to have successfully treated 350 people "and counting," including some with underlying medical conditions.

"You don't need masks, there is a cure," Immanuel says in the video. "You don't need people to be locked down." She was among physicians in a group called "America's Frontline Doctors" who made misleading claims about the virus at a news conference Monday in Washington.

Several Trump allies, groups and conservative news outlets shared the video of the event on Facebook and Twitter.

In another video shared widely on Twitter by a pro-Trump nonprofit, Immanuel claims Fauci and CNN anchors are secretly taking hydroxychloroquine and challenges them to give her a urine sample.

Trump initially flouted guidance from the Centers for Disease Control and Prevention on wearing face masks, saying he wouldn't wear one himself and refusing to don one in public.

After multiple polls showed the public disapproves of his handling of the coronavirus, Trump recently began encouraging people to wear face coverings as he tried to project a more serious tone about the virus, which has surged in Arizona, California, Florida, Texas and other states.