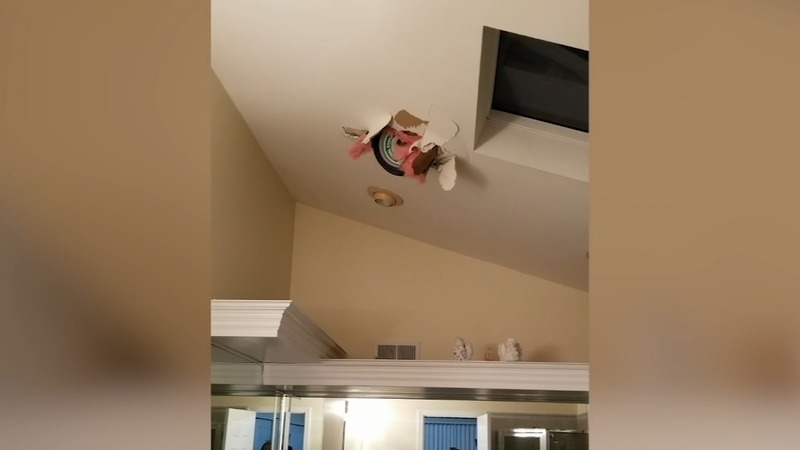 LYNWOOD, Ill. (WLS) -- A Lynwood family was stunned when a wheel from a helicopter came crashing through the roof and ceiling of their home, leaving a hole so big rain came right into the house.

No one was injured. The home is located near the airport in Lansing.

Linda Taylor-Whitt said the impact must have caused an enormous sound, but none of her neighbors heard it. Instead the surprise from the sky was discovered by her daughter, who was just heading upstairs to use the bathroom.

Taylor-Whitt and her family had just returned home from dinner Saturday night when they realized something truly bizarre had just happened.

"I just couldn't believe it, I just stood there like what the hell," Taylor-Whitt said. "I could not believe that a tire--and I was like 'Is this an airplane?'"

In disbelief and understandably frightened, Taylor-Whitt said she called the police. The cops were just as baffled, so they called the fire chief.

"And they couldn't believe what they were seeing and he was like I've never in my life seen this. He said I've been a fireman for 30 or 40 some years," she said.

Taylor-Whitt's home is just west of Lansing Municipal Airport, and officials began to piece together the mystery. She also got a call Monday from the owners of SummerSkyz, Inc., a flight school that has a helicopter at the airport.

"They were taking responsibility for it, and whatever needs to be done they would take care of it," Taylor-Whitt said.

It turned out the wheel was not from an aircraft, but from a device that moves a helicopter from one hangar to another. Somehow it stayed attached to the chopper until it fell off directly above the house.