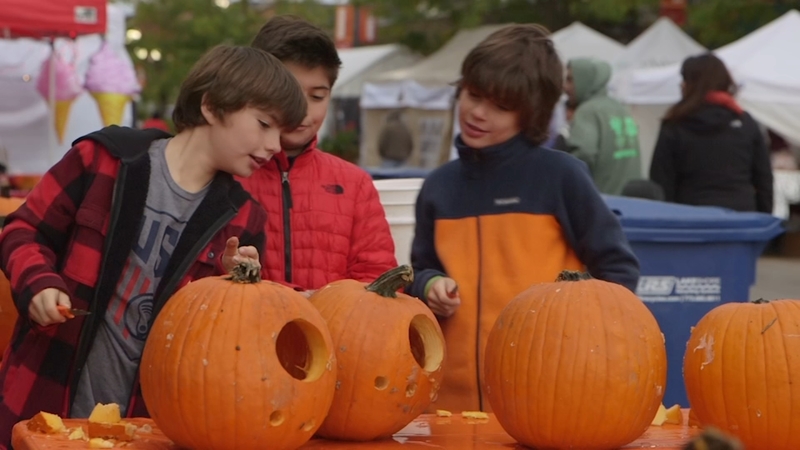 The festival was established with the hopes of breaking the world record for most jack-o'-lanterns in one city, really a two-city competition between Highwood and Keene, New Hampshire.

"Pumpkin Fest was all about bring people back to our little town," Mayor Charlie Pecaro said.

Keene's pumpkin festival dates back to 1991. Highwood has never successfully out-carved its east coast competitor for the pumpkin record. And five years ago, the town pivoted toward a goal of donating to charity.

According to Highwood, Make-A-Wish Illinois has received $140,000 from the previous three Pumpkin Fest donations. During each night of the festival, one Make-A-Wish recipient shares their story with festival attendees before turning off the city lights to illuminate the city with only jack-o'-lanterns.

"Everyone is just in awe," Pecaro said. "People are posing, people are cheering. It's one of those things you just have to go to it."

Pumpkin Fest is the biggest of 12 events coordinated by the nonprofit Celebrate Highwood. Other events include 5Ks, farmers markets, food and drink festivals, and pub crawls.

Celebrate Highwood was established to help restore Highwood's 'destination' status that it enjoyed a century ago.

"There's a lot of history here in Highwood," said Alderman Eric Falberg. "We were known as Whiskey Junction. We were also known as the 'toughest town in America,' quoted by Theodore Roosevelt. And that is no joke."

Ross Kessler lives right next door in Highland Park, but he has made himself part of the Highwood community through his jester-themed food trucks and stands.

"I'll tell you the scoop on Highwood. It's such a nice community. It has good restaurants, good bars," Kessler said. "We're sandwiched in between two very affluent communities, and it's kind of a nice little mellower place."