WLS
By Jessica D'Onofrio
CHICAGO (WLS) -- Police are searching for a driver who fatally struck a 5-year-old girl in the city's Chicago Lawn neighborhood and did not stop.

Investigators said they are looking for a two-door, dark-colored Honda Civic with a dull or primer finish, a sunroof and a spoiler. The vehicle may have a front-end bra, a sport muffler and a broken lamp.

Police are looking for a dark-colored, four-door sedan with a sunroof and spoiler that struck and killed a 5-year-old girl on Saturday.

Juan Marcos Gonzalez said his daughter, Lupita Gonzalez, was doing homework around 3:15 p.m. Saturday when she heard an ice cream truck passing through her neighborhood. The ice cream truck stopped near her house at West 59th Street and South Mozart Avenue.

Surveillance video from a neighbor's home security system shows Lupita safely crossed the street to get a treat. The video shows the 5-year-old girl was hit as she returned home.

Juan Marcos Gonzalez said he saw the car coming at his daughter and tried to run to her, but was stopped by a locked gate.

A number of neighbors also witnessed the hit-and-run.

"It didn't stop. When I came out, it was by the corner. It didn't even stop for the stop sign," said George Castrejon, a neighbor.

"She was trapped under the vehicle. I didn't even want to look at the girl, that's how bad it was," said Esteban Anaya, who also lives nearby. "Whoever did it, I suggest you turn yourself in. It's the best thing for you."

A memorial for Lupita continues to grow near the spot where she was hit. Family members and neighbors left candles flowers and her favorite dolls.

"She was always full of energy. Whenever we were together she would do one of her favorite dances with her skirts and her tutus," said Brenda Garcia, Lupita's cousin. 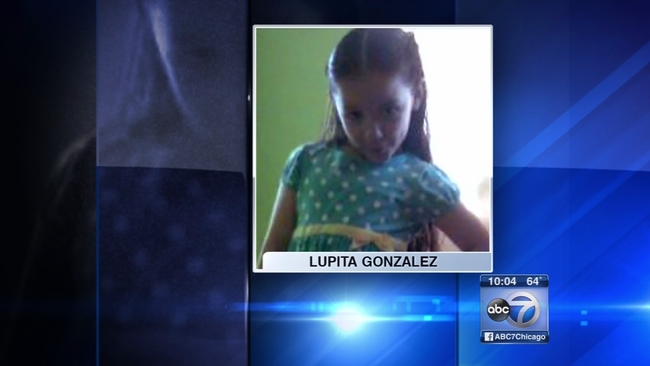