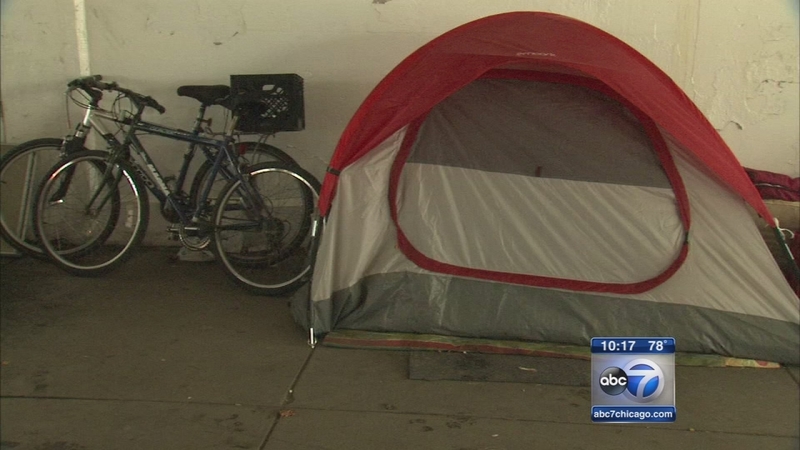 CHICAGO (WLS) -- The new face of homelessness is families. An estimated 140,000 homeless people live in the city including thousands of public school students in shelters, in tents, in parks or just in whatever place they can find across Chicago.

For one month, the I-Team asked city officials to appear in this report and discuss what you are about to see. They said no.

Thousands of others live in small tent villages, spanning the city from in the shadow of North Lake Shore Drive to one on Columbus Drive near downtown. Still others sleep on park benches and on the banks of the Chicago River.

For months, the I-Team watched as these encampments popped up across the city, where people struggle to be respected and understood, wanting only to be treated like human beings.

"All we're asking is to be treated like human beings," says one homeless man named Meechie.

The challenge may be as ancient as the Old Testament, but the new face of homelessness is far younger.

"Chicago Public Schools keeps track of how many students are homeless," says Ed Shurna, Executive Director of Chicago Coalition for the Homeless. "Last year there were over 22,000 homeless students."

The I-Team found that's up nearly 20-percent from the year before. Shurna is a longtime homeless advocate in Chicago.

"Last year there were 2,500 students who have no adult in their life and still go to school. Those numbers, to me, have changed over the past 20 years," he says.

For Kaleyah Wesley, that translated to a four-hour commute to North Lawndale with her brother and sisters to attend William Penn Elementary School located near the apartment where they lived before becoming homeless. For a student in a shelter, the new normal was a challenge.

"I would have to go in the bathroom at maybe 3 o'clock in the morning to do my homework because I still wanted to be that student I knew I could be," Kaleyah says.

Kaleyah's mother, Marilyn Escoe, says losing her apartment was devastating but that the support she received from others in the shelter helped.

"They became like a second family because we embraced each other's struggles," Escoe says.

The I-Team found sometimes those struggles clash with political reality. Under this agreement between the city and the Chicago Coalition for the Homeless, people are supposed to be notified of street sweeping so they can take down their tents, move their bicycles and bags of clothing and then return once cleaning is finished.

"But recently we found out that the system didn't work when there was a concert at Montrose Beach in the city," Shurna says. "They very haphazardly came in and moved people."

Attorneys from the Coalition say they are working with the city to make sure that doesn't happen in the future.

"I think the mayor cares about this, but the problem is pretty awesome, pretty big. It's really an affordable housing and jobs problem. It's a problem of disparity in terms of wealth," Shurna says. "He's created some of the first youth shelters, overnight shelters and drop-in shelters that didn't exist before."

Kaleyah and her family say the city's Students in Temporary Living Situations program helped her become salutatorian of her 8th grade class.

"I really appreciate everything that I went through. It really opened up my heart so much," she says.

Since 2003 Chicago has spent $50 million dollars on homeless prevention and there are numerous homeless aid programs. But neither the Chicago Department of Family and Support Services nor Mayor Rahm Emanual would talk about them for this report.

A mayoral spokesperson said there is no single city official capable of addressing our questions about the new face of homelessness.

City of Chicago officials refused repeated invitations from the I-Team to discuss a burgeoning homeless problem, the growth of tent cities or the programs on which they spend millions of taxpayer funds. Instead, after a month of requests, they sent the following two-sentence statement:

"The City of Chicago is committed to a compassionate and consistent approach to providing homeless services and outreach that will ensure public safety, while respecting the legal rights of this vulnerable population. In addition ongoing outreach efforts to offer shelter and social services to homeless individuals on a daily basis, we remain engaged in an ongoing dialogue with homeless advocates about how to best address the special needs and challenges of our homeless citizens, and to assist every Chicagoan in having a place to call home."

Background from city on homelessness:

HOMELESS EFFORTS:
- Mayor Rahm Emanuel has increased funding for homeless services by more than 10 percent and invested in new programs targeting veterans, youth, families, and victims of domestic violence. With the support of the Mayor, DFSS continues its work with non-profits, advocacy groups, and service providers to establish funding priorities for homeless populations via the community-driven Plan to End Homelessness 2.0.
- Worked to pass the Affordable Requirements Ordinance in March 2015, which expanded the City's commitment to providing affordable housing in Chicago. The City estimates the revised ordinance will create 1,200 units of housing and generate $90 million in funding by 2020.
- Launch a campaign to end homelessness among veterans in Chicago (with the federal and local partners). Over the past year, a team of more than 25 non-profit organizations and public funders designed and implemented a coordinated entry system for veterans that will ultimately lead to providing permanent housing to veterans and ending veteran homelessness. Since the inception of the initiative we have housed more than 800 veterans.

HOMELESS FAMILIES
- Placed nearly 300 households into housing through its Rapid Rehousing Program.
- Funded and broke ground on the first new domestic violence shelter in more than a decade which will have 40 beds and serve more than 100 families annually. It is expected to open late 2015.
- Added a new facility with 75 beds for homeless families that has come online since a 2015 survey.

OUTREACH AND CLEAN UP
- DFSS conducts outreach and cleaning efforts while abiding by joint terms with homeless advocates, which set clear parameters for how cleanings take place and the types of personal property permitted. These routine cleanings include an advance notification period so that our homeless residents have ample time to prepare and remove their possessions from the area being cleaned. Residents are not permitted to erect tents, or other structures, on the public way, and the City has been working to address tent cities throughout the city as part of these coordinated cleanup efforts.
- DFSS HOP teams encounter close to 7,000 homeless individuals per year with a primary focus to build rapport with homeless individuals and try to engage them in services.
- City engages in periodic cleaning efforts in advance of large-scale events in order to ensure that the public way is kept safe and accessible.
- In 2014, the Human Services Mobile Outreach Program, which is operated by Catholic Charities of the Archdiocese of Chicago, responded to over 39,000 requests for shelter placement and transportation, well-being checks, emergency food assistance requests as well as providing assistance to victims of fires and natural disasters.
- The City conducts mandated counts using federal criteria and guidelines to secure a comprehensive count/survey of Chicago's homeless population in both shelters and living out on the street. The needs identified in previous counts have helped us with the development of Chicago's recently updated Plan to End Homelessness - Plan 2.0. Each year, the City of Chicago establishes funding priorities that align with the priorities of this community plan.
- According to our surveys, the homeless population has been relatively stable over past five years.