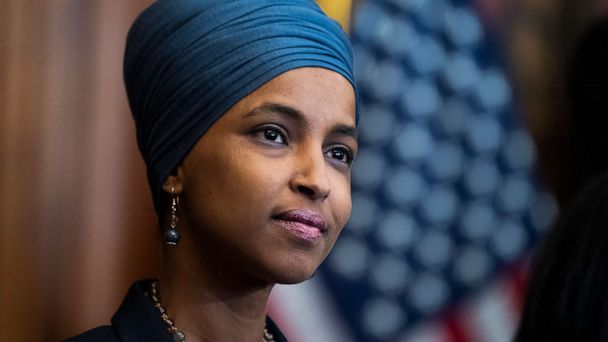 
Floor debate of the bill was ground to a halt earlier Tuesday, after GOP Rep. Scott Perry, of Pennsylvania, referred to Omar as anti-Semitic and implied that she has ties to terrorist organizations -- a comment which led to audible gasps from some Democratic members in the chamber.

"Let's face it: Aside from the attempts to placate an anti-Semitic member of this chamber, all that's really happening here is that House Democrats are deflecting from the real issue confronting the House of Representatives, and that is that the maker of this bill has no business sitting on House committees has no business in this chamber," Perry said of Omar, who is a lead author of the bill.

"American taxpayers shouldn't be forced to pay terrorist organizations, organizations that the maker of this bill is affiliated with, like the one that's an unindicted co-conspirator in the largest terror-financed case in the United States of America's history," Perry said.

He did not provide any context or evidence of his claims during his remarks.

Perry also cited a lack of definition for the word "Islamophobia" in the bill, which he argued would be "made up" based on individuals' "political proclivities."

"And by intentionally leaving the definition blank in this bill, the gentlelady and my friends on the other side of the aisle are creating an office in our State Department that will likely spew anti-Semitic hatred and attack Western ideas throughout the world under the farce of protecting Islam," he said.

Democrats -- furious at his remarks -- immediately lodged a formal objection and asked Perry's comments be stricken from the record.


Democratic Rep. Debbie Dingell, of Michigan, could be heard on the floor saying to her colleagues, "He called her a terrorist! ... We can't let this go."

The House parliamentarian later found that Perry made inappropriate remarks that were "not in order" with House rules.

The vote on Omar's bill comes just a few weeks after video emerged showing Boebert calling Omar a member of a "Jihad squad" and claimed that a Capitol Police officer thought she was a suicide bomber in an encounter in an elevator on Capitol Hill.

Boebert apologized on Twitter "to anyone in the Muslim community I offended," adding that she had reached out to Omar's office to speak with her directly. It didn't go well.

Omar hung up on Boebert after the Colorado Republican refused to make a public apology to her, according to a statement from Omar and Boebert's account of the call.

Democrats have called on Republican Leader Kevin McCarthy to condemn Boebert himself, but he has not done so.


McCarthy, however, did not specifically address the content of Boebert's bigoted remarks that set off the exchange.

House Progressives introduced their own bill last week to specifically condemn Boebert's actions and boot her from her committee assignments, but Democratic leadership has not put the bill on the floor for a vote.

It's unclear what action will be taken against Boebert, if any.

The bill passed Tuesday night "requires the U.S. State Department to create a Special Envoy for monitoring and combating Islamophobia and include state-sponsored Islamophobic violence and impunity in the Department's annual human rights reports."

The creation of the Special Envoy will "help policymakers better understand the interconnected, global problem of anti-Muslim bigotry." It will also establish a "comprehensive strategy for establishing U.S. leadership in combatting Islamophobia worldwide," according to a summary of the bill.