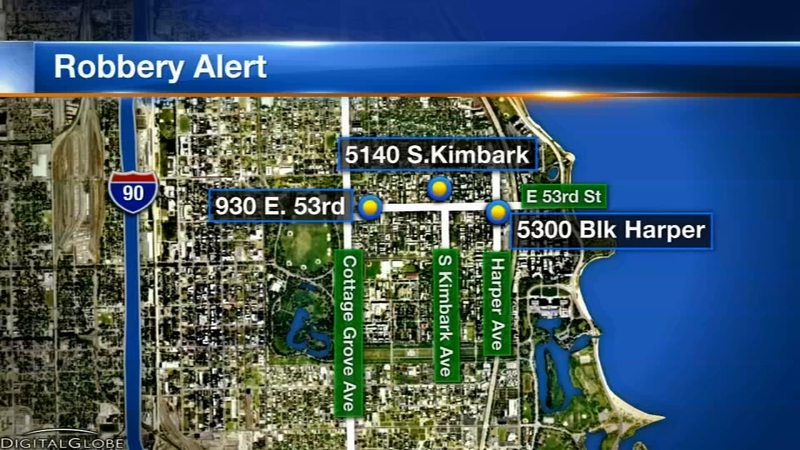 U of C police issue alert after robberies, knife attack in Hyde Park

CHICAGO (WLS) -- Two robberies and a knife attack were reported this past weekend near the University of Chicago campus in city's Hyde Park neighborhood.

"I am concerned and I want it to stop I want to feel good," said area resident Peggy Riggins.

At about 11 p.m. Sunday, in the 900-block of East 53rd Street, a jogger's iPhone was stolen, according to a University of Chicago crime bulletin. Two offenders, who got out of a white sedan, took the phone and then got back into to the car after the robbery. The jogger declined medical attention.

University of Chicago police also reported a robbery at 1:35 a.m. Friday in the 5100-block of South Kimbark Avenue. Police said a person walking on the sidewalk was approached by three suspects from behind and grabbed. The offenders took the victim's iPhone and wallet before entering a silver SUV. That victim also declined medical assistance.

Peter Freund, a U of C grad, said he was hit on the head and robbed of his wallet in March.

"When I woke up and I came to the cops were in my living room and I filed an incident report," said Peter Freund.

Some residents like Lyvonne Turner says she loves living in Hyde Park, but because it's a desirable area she is careful.

"It's a great area, yes, but people use it as a target because it's a great area and people walk around 'Oh I live in Hyde park so yeah I'm good' and no you're a target now because you think you're good," said area resident Lyvonne Turner.

Friday afternoon, University of Chicago police reported an aggravated battery on Harper. Police say in that incident an offender left an off-campus apartment building and slashed a victim with a knife without provocation. A suspect in the incident was taken into custody.

Chicago police are investigating the three incidents, but have not issued a community alert, saying they're still investigating.