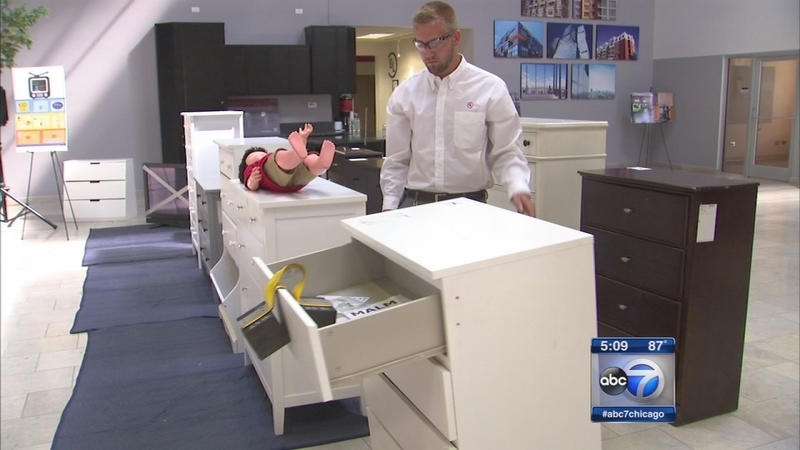 The ABC7 I-Team is investigating dresser dangers and how children can be at serious risk for injury or even death.

Consumer activists said that one child dies every two weeks from tipping furniture and appliances.

Now a local children's safety group is pushing for more federal regulations. On Tuesday, the I-Team saw how dangerous dressers can be.

In a demonstration you can see how easily an unanchored dresser can fall on a child. The test was done by the independent safety certification company Underwriters Laboratories in Northbrook.

"It can happen, it does happen," said Lisa Siefert, the mother of a child who was killed in a dresser accident. "I want people to think of Shane and look at their homes with a new eye."

Siefert's son died in 2011 when a dresser crashed down on him in his Barrington Hills bedroom.

"I said I love you at the door and he said I love you back," she said. "The he turned and rolled over to go to sleep and when I went to wake him from his nap I found him under his dresser."

Siefert, Kids in Danger and UL are raising awareness and asking the Consumer Product Safety Commission to implement tougher standards.

"Our new report today reveals significant risk to children from dressers or chests that top over and finds that current safety standards, which are voluntary, are dangerously inadequate," said Nancy Cowles of KID.

KID said those current voluntary standards do not test on carpet, which is less stable. Current tests use only 50 lbs. of weight, unlike the KID/UL tests, which added up to 70 lbs.

Their testing revealed that 9 of 19 dressers passed current standards while only two passed its enhanced ones.

"All parents deserve the peace of mind that their furniture in their homes is not going to injure or kill their children," said Schakowsky.

UL found that some dressers, which only allow one drawer to open at a time, are safer.

"So a lot of kids will open one drawer and they will try to open the next one to climb up and up, which makes it more dangerous and more likely to tip over, which this one doesn't allow," said a UL official.

Experts also said wider bases and anchors on walls can save a child's life.

"Think of a child under that, my child, could be your child," Siefert said.

The Consumer Product Safety Commission said it is reviewing the new tests and will look seriously at the Kid report.

"We're examining the results of this important and timely study closely and will incorporate its findings as appropriate into our enforcement and standards work around this ongoing and unacceptable hazard. I continue to believe furniture tip-overs are a solvable problem. Designing and building more stable furniture must be a core part of any solution. Consumer education efforts, such as the #AnchorIt campaign, remain necessary while the safety work continues. In the interim, I reiterate that anyone producing or selling furniture not compliant with the current voluntary standard should prepare to work with us regarding a recall modeled on similar recent furniture recalls," CPSC said in a statement Tuesday.