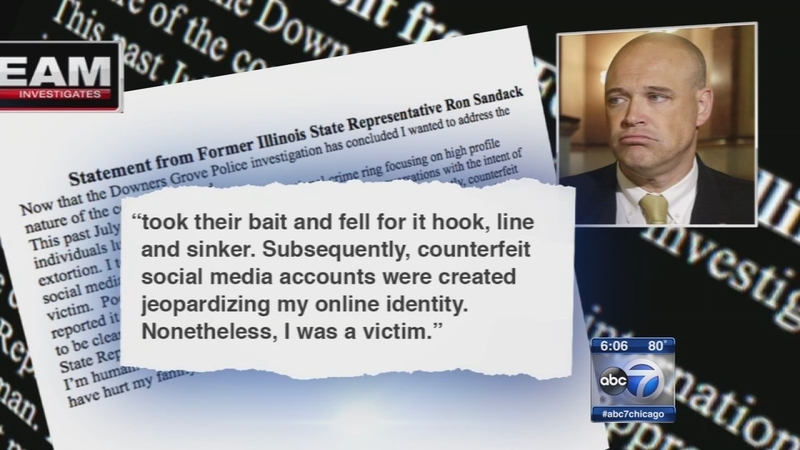 According to Downers Grove police reports, in early July Rep. Sandack was engaged in a video conversation via Skype with a woman "in her early 20's with long black hair." The woman, whom Sandack told police he didn't know, had originally contacted him on Facebook.

Rep. Sandack, 52, and the woman had several text exchanges on Facebook that "could be characterized as friendly conversation, like two people getting to know basic information about each other" investigators say.

A short time later, the Downers Grove father of two connected via Skype video-where internet users see and speak to each other on their computer screens. Although the nature of the conversation between Sandack and the woman is blacked out in the Downers Grove police report, similar blackmail schemes have resulted in disrobing and sex talk between the participants.

In Sandack's case, the woman on the other end of the Skype hook-up told him that she had made a video of their encounter and would distribute it to all of his Facebook friends...unless he paid her a sum of money...which he did. This scheme is fairly widespread in the U.S. and well known to federal law enforcement officials. Authorities have screenshots of Mr. Sandack's communication with the woman.

Police determined that the money Sandack paid by wire transfer was picked up in the Philippine islands. Because of the overseas involvement, "there was limited follow up investigation that could be accomplished by U.S. authorities" the police report states.

Police sources have told the I-Team that they do not anticipate being able to make any arrests in the blackmail case.
Friday afternoon Sandack said in a written statement that he "was the target of an international crime ring focusing on high profile individuals luring them to engage in inappropriate online conversations with the intent of extortion."

The prominent GOP leader said he "took their bait and fell for it hook, line and sinker. Subsequently, counterfeit social media accounts were created jeopardizing my online identity. Nonetheless, I was a victim."

It isn't evident from the records how much money Sandack paid in his effort to prevent distribution of the embarrassing video, but police records state he wired payments "via Western Union...and wired (redacted) via MoneyGram as instructed."

In a statement at the time he quit in July, Sandack claimed he had been a victim of an "internet scam" and that he had concerns about "cyber security issues." Now Mr. Sandack, a downtown Chicago attorney is sending a signal of repentance for what happened. "I'm human" he says. "I made a mistake for which I am remorseful and ashamed; especially because I have hurt my family, and there is no greater self-inflicted wound than that."

"We will destroy you and your marriage and career if you don't, and asked for $2,500," Kintner said.

"It's just a hard lesson to learn and so many people don't seem to have learned it. The only way to stop the problem is don't fall for it but people fall for it over and over again," said ABC7 Legal Analyst Gil Soffer.

Unlike Sandack, Kintner is not resigning, saying he is apologizing to his constituents.

In his full statement on Friday, Sandack said, "Now that the Downers Grove Police investigation has concluded I wanted to address the nature of the complaint I filed.

This past July, I was the target of an international crime ring focusing on high profile individuals luring them to engage in inappropriate online conversations with the intent of extortion. I took their bait and fell for it hook, line and sinker. Subsequently, counterfeit social media accounts were created jeopardizing my online identity. Nonetheless, I was a victim. Poor decisions on my part enabled me to be a victim and, as a responsible citizen, I reported it and have been working with the police throughout their investigation. I want it to be clear that no aspect of my involvement in this incident was related to my position as a State Representative nor was the computer state property.