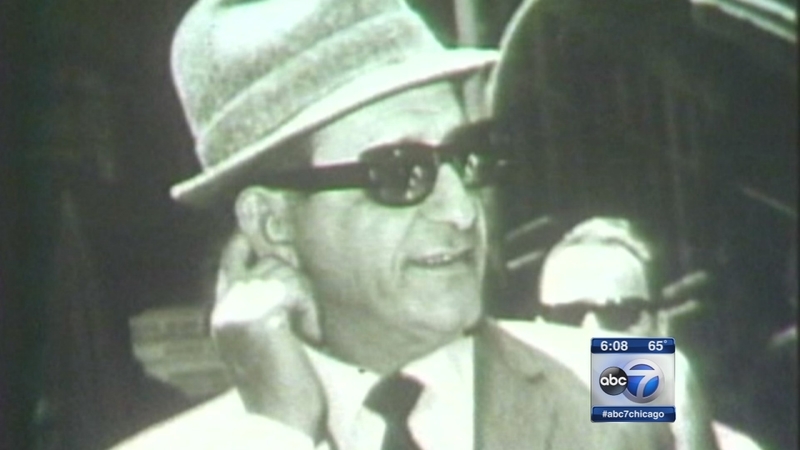 CHICAGO (WLS) -- A Chicago crime mystery that the ABC7 I-Team has been following for four decades remains unsolved.

Mob boss Sam Giancana was killed 40 years ago in his west suburban home and who did it is far more of a puzzle than why.

Giancana was born on the West Side and died not far from where he was born, assassinated 40 years ago Friday night in Oak Park. During the years in between, Giancana became one of the world's most powerful organized crime bosses; he allured Marilyn Monroe and some say got John F. Kennedy elected president. But on this night in 1975, he was cut down like the street thug that his enemies believed he was.

On June 19, 1975, Giancana invited a friend in his home for sausage and peppers. Before the meat was done, that man would become Giancana's killer.

The 67-year-old top hoodlum was shot in the head and neck as he fried up the evening snack, seven shots fired from a silencer-equipped .22 caliber pistol.

Chicago mobologist John Binder said Giancana was killed by his longtime driver and close confidante Butch Blasi, who had attended a small party at the Oak Park home, left and then returned.

"He was there that night," Binder said. "A car registered to him or to his family returned there that evening after everyone else had gone home. Not long thereafter they found Giancana dead on the floor of his basement."

The crime boss's nephew has told the I-Team that notorious outfit member Anthony "Ant" Spilotro was given the assignment to rub out Giancana, a belief also held by the late suburban police chief Michael Corbett, a one-time Giancana associate.

"By himself in the house, boom-boom-boom, see you," Corbett said. "He knew how to get into Sam's house without people seeing him, only a few people knew how to do that and he was one of them."

"He was a man who knew too much and ultimately he had to be silenced," said Sam Giancana, the mobster's namesake nephew. "He was killed the night before federal agents were to take him to Washington to testify."

Giancana's was to appear before a Senate committee investigating CIA and mafia links to plots to kill Fidel Castro.

"There's been some claims that the CIA hit Sam Giancana because either they were mad at him or to cover up that he had quote, 'helped them in the plot against Castro,'" Binder said. "That's another conspiracy theory. Conspiracy theories are long in allegations, very, very short in any convincing evidence."

There were other potential suspects in Giancana's murder, the notorious hitman Harry Aleman and mob enforcer Butch Blasi. But with all of them also dead, the likelihood of justice in the case of Sam Giancana seems slim.

Outfit investigators suspect the order to kill Sam Giancana 40 years ago would have come from the bosses at the time, Joey "Doves" Aiuppa or Anthony "Joe Batters" Accardo, and probably both of them. But with Aiuppa, Accardo and everyone else who had a hand in the hit also dead, the likelihood of justice ever coming in the case of Sam Giancana seems slim.