Are restaurants open in Illinois? Most forced to close indoor dining due to new state COVID-19 restrictions
WLS
By Diane Pathieu, Sarah Schulte and Jesse Kirsch 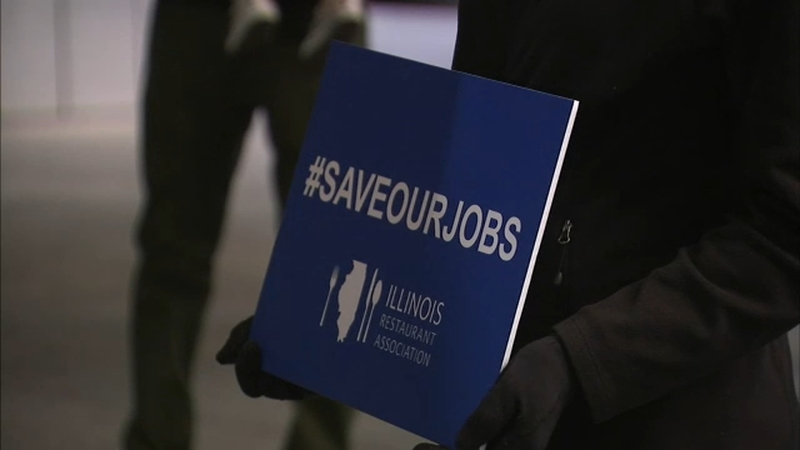 ALGONQUIN, Ill. (WLS) -- Dozens of McHenry County restaurants have filed a lawsuit against the state over COVID-19 restrictions, but a judge's order Friday sided with the governor.

There are 37 restaurants and bars in the northwest suburbs challenging the governor's emergency powers to shut down businesses.

After Gov. JB Pritzker put more restrictions in place this week due to increasing COVID-19 cases across the state, lawsuits have been filed on behalf of several restaurants, but the largest suit is coming from McHenry County.

With many Illinois restaurants closing indoor dining due to a surge in COVID-19 cases, 37 in McHenry County are suing the state over Gov. Pritzker's new restrictions.

Officials in Itasca, Libertyville, Morton Grove, Aurora and Orland Park are also saying publicly they will not help the state enforce the ban.

Some are even questioning the science behind the decision since only a small number of cases appear to have been traced back to bars and restaurants.

"You can only assume one of two things, either the data doesn't support the decisions that they make, or they don't trust the data that they're getting ... in which case they don't have the data to make the decisions either," Orland Park Mayor Keith Pekau said.

The lawsuits challenge the governor's emergency powers, which attorneys for the businesses claim expired 30 days after the initial disaster proclamation.

A hearing on the latest lawsuit was scheduled for Friday, where a McHenry County judge denied the restraining order.

"Today in court, the Judge denied the restraining order. If restaurants stay open after midnight it will be considered illegal," said John Dixon, an attorney representing some of the McHenry restuarants.

The Illinois Restaurant Association held a press conference Friday morning in Chicago's Loop, condemning Pritzker's mitigation efforts. The organization represents about 25,000 restaurants across the state and said 90% of restaurants will be forced to stop indoor service by Sunday.

Chicago restaurant owner Martin Murch pointed to a large tube on his kitchen ceiling, another in the dining room, and a third in an adjoining coffee bar. The tubes are an air filtration system that uses UVC technology to kill bacteria and viruses including, COVID-19.

"It's the same technology being used on airplanes, hospitals, pharmaceutical packaging -- any controlled environment," said Murch, with the Goodeats Restaurant Group.

Each chamber, which costs $3,000 a piece, was just installed two days ago, only to have Governor Pritzker shut down indoor dining again as of Friday. Outdoor dining is now the only option available.

Whether it's air systems, masks, sanitizing, or social distancing, Illinois' restaurant industry says it has gone beyond the call of duty to make restaurants safe.

"We are being singled out for closure even though restaurants are the most highly regulated, frequently inspected and health focused industry there is," said Illinois Restaurant Association President & CEO Sam Toia.

The Illinois Restaurant Association, who months ago supported Governor Pritzker on COVID-19 restrictions, is now supporting restaurant lawsuits against him.

Toia predicts nearly 20% of the state's restaurants will close if the shutdown sticks.

Thousands of jobs will be lost in this second round of closures, members of the restaurant community said Friday, and an estimated 86% of restaurants will not make a profit this year.

Murch has already closed two of his four restaurants, and said with all the safety precautions restaurants are taking, they should be part of the solution not the problem.

"We are not shutting down the airline industry, why are shutting down restaurants," Murch said. "We have an opportunity to actually champion what these restrictions are."

The association said the industry is in crisis, and it, too, plans to join the lawsuits.

The term "bubble" has been used throughout the pandemic, indicating the number of people you interact with without a mask. It should be small, secure, and strict.