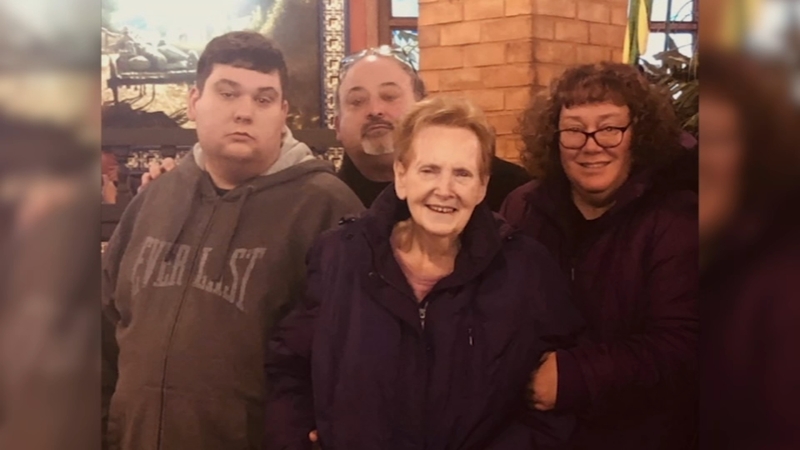 CHICAGO (WLS) -- All four members of a Carol Stream family contracted COVID-19, and while there were some scary moments all four of them have survived.

Chuck Drungelo has had a long journey to recovery, and even had to learn how to walk again. Now he spends his days at Northwestern's Marianjoy Rehab Center in Wheaton, but a few weeks ago it wasn't even a certainty he'd live.

Chuck spent 19 days on an ECMO machine, a form of life support, in a last ditch effort to save his life after being diagnosed with COVID-19 sometime in April.

"I didn't realize how close I was to not being here, but it's uh," he said, choking up briefly. "I pretty much asked God to keep me here because I'm not done helping my son. And I want to be here for my wife."

His son Jordan, wife Diane and her mother Barbara all came down with COVID-19 as well.

Chuck Drungelo, his son Jordan, wife Diane and her mother Barbara all came down with COVID-19.

"I had to drop my 81-year-old mother, by herself, and let her walk in and leave her," Diane Drungelo said. "Which was the hardest thing I've done."

Within a week, Diane repeated the process for her son, her husband and finally herself. It was a nightmare scenario; all three Drungelos were placed on life support.

"They were in the same intensive care unit and virtually right next to each other," said Dr. Jeffrey Huml, Northwestern Medicine. "Chuck's wife was right next to him and their son was just two doors away. Chuck was the sickest of all. We didn't really know if all three were going to survive intact."

"This is the first time ever in our history we've had three family members on life support at the same time, and not only were they on life support, they had multiple organ system failures," Huml added. "They were in shock."

Barbara was the only member of the family not to go into the ICU, though she is still undergoing rehabilitation as she recovers.

"I don't think it really hit me until the Sunday after it was all over. I just was home by myself and I just sobbed," Diane said.

Thursday, reunited with Dr. Huml for the first time since all three were released, elbow bumps replaced hugs.

"It's hard to describe. Saying thank you doesn't seem like enough," Chuck said.

The whole experience has given the family a new lease on life, but they said they are sharing their story in the hope that people will continue to take the virus seriously.