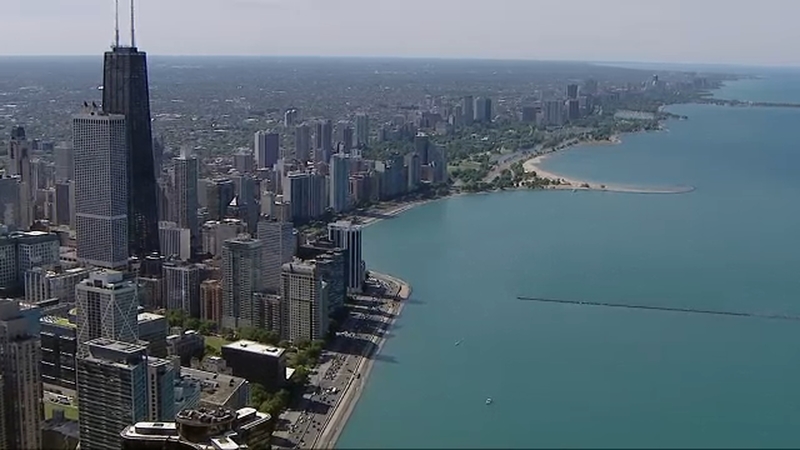 CHICAGO (WLS) -- The city of Chicago is on its way back. A pair of major announcements by Mayor Lori Lightfoot and Governor JB Pritzker brought the light at the end of the pandemic shutdown tunnel into view.

The first announcement was that the Chicago Auto Show will take place this summer at McCormick Place.

The second announcement was that Mayor Lightfoot has set the goal of fully reopening Chicago by July 4. State officials said Illinois is on track to be in Phase 5 of reopening by July.

Mayor Lightfoot said pandemic metrics are all headed in the right direction for the reopening timeline.

A full reopening would mean restaurants and bars would no longer have capacity limits. It would also clear the way for more conventions at McCormick Place and other venues. For the struggling hotel industry, the news is a game changer.

"We had so many questions from meeting planners, 'Am I going to be able to hold my convention this summer,' and until today, we didn't know the answer," said Michael Jacobson, president and CEO of the Illinois Hotel and Lodging Association. "But now it's clear that starting in July we'll be in a position to start resuming those large shows."

Currently 18 downtown hotels remain closed, but the return of conventions would be huge for the hospitality industry and the city in general. There are 15 major conventions currently planned from July through December. Industry figures project they would bring 268,000 people to Chicago, booking 373,000 hotel rooms and generating an estimated economic impact of $529 million.

"Tourism and hospitality was one of the first industries hit by COVID, and by all accounts it will be one of the last to recover," said Glenn Eden, chairman of Choose Chicago. "But today's news is a beacon of hope."

Mayor Lightfoot is also in talks with big outdoor festival planners. Decisions about major festivals like Lollapalooza are not yet finalized, but Lightfoot said discussions are underway with organizers.

"We can't predict the future but we feel very confident if we continue to follow public health guidance and get people vaccinated, that this summer is going to be very different, very festive," the mayor said.

Gov. Prtizker indicated the rest of the state could also be ready to reopen fully in July.

The state's incremental reopening plan consists of a Bridge Phase that would precede a full-scale reopening, allowing a wide range of businesses to open their doors to more customers. The governor says that could come as early as next week.

The Chicago Auto Show will return to McCormick Place in July for its 2021 convention.

The abbreviated Auto Show will take place July 15-19, which is shorter than the normal nine-day run in February, bringing back jobs and an economic boost.

Face masks will be required at all times. There will be contactless delivery for tickets. Temperatures will be scanned and a medical questionnaire must be filled out before entering. A vaccine will not be required.

The show will be smaller, limited to 10,000 people at a time, and shorter, but it is in on nonetheless. And that's big news for many workers whose livelihood depends on conventions and trade shows.

"It's been tough on a lot of guys with no work, unemployed or laid off," said Don Villar with the Chicago Federation of Labor.

Mayor Lightfoot said it is all made possible by improving health metrics.

"Around this time last year, McCormick Place was turned an alternate care facility that significantly aided our city during the first wave of COVID-19-making today's announcement all the more special," said Mayor Lori E. Lightfoot. "In the same spirit of collaboration between government, healthcare, community, and corporate partners, we are now able to bring conventions back to our beloved convention center in a way that is safe and reflective of our progress in slowing and stopping the spread of this virus. I look forward to seeing the McCormick Place reopen its doors for the Chicago Auto Show this July and further enhance our city's ongoing Open Chicago initiative."

"With strong public health protocols in place, the Chicago Auto Show will be the first large convention to take place in Illinois since the onset of the COVID-19 pandemic, setting the stage for the safe return of big events in the months to come," said Governor JB Pritzker. "The lifesaving power of vaccinations and the hard work by the people of our city and state has led us here. In recent weeks, we have seen our statewide COVID case rates and hospitalizations flatten and begin to fall, demonstrating a surge far short of the one we saw over the fall and winter. To be clear, our fight against the virus isn't over yet - but things are getting better."