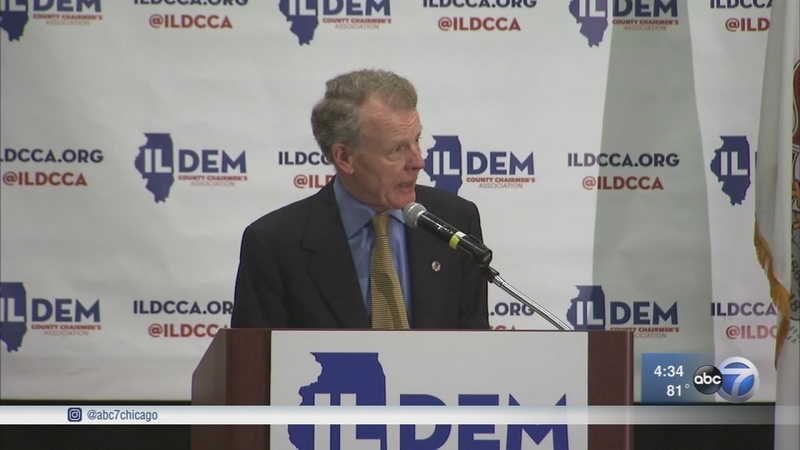 SPRINGFIELD, Ill. (WLS) -- Illinois Democrats rallied on Thursday in Springfield on their day at the State Fair.

They have one primary goal for next year's election and that is to take back the governor's office.

Just the mention of Gov. Rauner's name had the record crowd of 1800 Democrats booing at the annual Illinois State Fair Chairman's Brunch on Thursday and throughout the morning party leaders played on that sentiment.

"The important message is after the primary, we need to come together as a party and realize what the goal is here, in terms of a new governor in our state," said U.S. Sen. Dick Durbin (D).

"This group of 1800 would tell you that we've had no organizers ever that have been as good to the Democratic Party as Bruce Rauner and Donald Trump," said Illinois Rep. Lou Lang (D) of Skokie.

Part of that effort clearly will involve trying to capitalize on anti-Trump sentiments.

"Too many people sat on the sideline during the last election and that resulted in the election of Donald Trump, people are outraged now by his behavior and his lack of moral leadership and they want to get involved and take control of the future of our state," said gubernatorial candidate Chris Kennedy.

"We're here today so they can hear us and that we can all pull together because we've got to in order to beat Bruce Rauner in 2018," said gubernatorial candidate JB Pritzker.

Democrats cancelled the usual rally they would have held on the fairgrounds after the brunch, but believe they have their battle cry now for the months ahead.

"We will run on a record to elect a democratic governor," said Illinois House Speaker Mike Madigan.