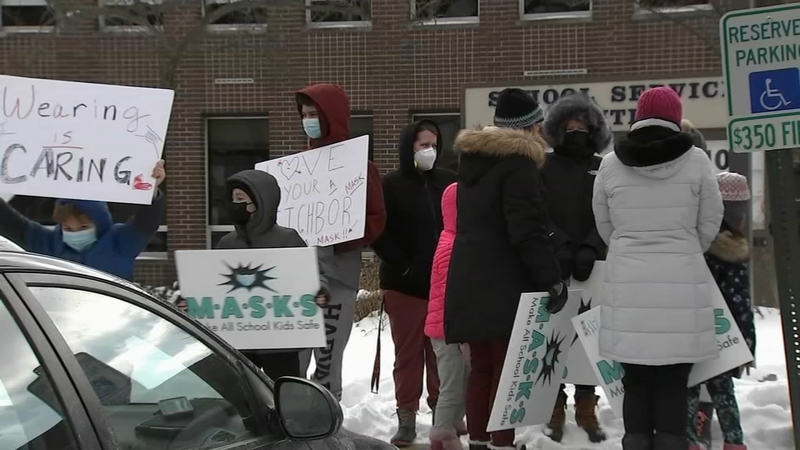 What the court's decision effectively does is leave the decision on face coverings to local school officials.

Woodland District 50 voted 7-0 to go mask-optional on Sunday. The new policy goes into effect Wednesday for students and Friday for staff.

Friday night, Hinsdale District 86 revisited the mask issue in light of the appellate court ruling. In a special meeting, the board approved a motion to make masks optional.

"My kids are going to be able to choose to wear a mask if they want to, but I like the options that the kids who choose not to, or the families to make that decision as well," said Jackie Riaz, a Hinsdale Central parent.

That district's new COVID-19 strategy will go into effect on Monday.

"Well, if it becomes mask optional, I'm not gonna be wearing a mask, but I don't like any sort of mandates in general. I think we should have the choice," said Hinsdale Central student Brux Dugan.

Some students are still concerned about their classmates potentially ditching their masks.

"I mean, I guess if it's the school district's choice, it's really like the majority of the people who live in this area's choice," said Hinsdale Central HS student Rania Arain. "So I mean, personally, I'm a little a little worried. So I'll be wearing my mask for sure."

Some students at Hinsdale Central previously walked out pushing to get rid of their district's mask mandate.

"It's really tough, because the board ruled not that long ago, and I thought it was gonna go to optional and it was completely the opposite," Hinsdale Central parent Jackie Riaz. "But the parents in our community are very, how can you say, they're very vocal about how they feel and they feel otherwise of what the vote was."

Administrators said they will continue to consult with the DuPage County Health Department on the district's mitigations.

The Chicago Teachers Union said they are encouraged by the ruling, because it did not impact districts like Chicago Public Schools that have masks mandates as a part of a collective bargaining agreement.

Schools across the state now weighing the appellate court ruling that denied the governor's appeal of a temporary restraining order against his mask mandate, but noted that "...the language of the TRO in no way restrains school districts from acting independently from the executive orders or the IDPH in creating provisions addressing COVID-19."

Earlier this week, a bipartisan legislative committee in Springfield suspended the renewal of the state's emergency mask mandate in schools.

As a result of that action, a three-judge panel of the 4th District Appellate Court ruled, "None of the rules found by the circuit court to be null and void are currently in effect...Accordingly, for the following reasons, we dismiss the defendant's appeal because the expiration of the emergency rules renders this appeal moot."

The ruling, posted late Thursday night, is a setback for Governor Pritzker, who sought to keep the mask mandates in place inside schools despite his plan to loosen mask restrictions in the state come February 28.

Friday morning, a spokesperson for Governor Pritzker released a statement saying, "The Governor is disappointed in the appellate court's decision and concerned for the health of those in schools - particularly vulnerable children and adults - and the ability to continue in-person learning. The administration is working with the Attorney General to request an expedited review of this decision from the Supreme Court. In the meantime, the Governor urges everyone to continue following the doctors' advice to wear masks so students can remain safely learning in classrooms, and is encouraged that the court made it clear that school districts can continue to keep their own mitigations in place."

The dismissal comes after a downstate judge ruled at the beginning of February in favor of a group of parents from across the state who sued over the mask requirement.

School districts across the state have been waiting for the ruling after weeks of tension and now, there's a bit more clarity.

The governor then appealed that ruling, but in the meantime, a legislative committee made up of Republicans and Democrats voted Tuesday against extending the mask mandate in schools as the state waited for guidance from the appellate court.

ABC7 Legal Analyst Gil Soffer said the ruling should mean that school districts can go mask optional, but they can also keep mask requirements too.

"To be more precise, what this ruling means is that they are not prohibited from choosing a mask optional route by the governor's orders, by the rules that had been in effect," Soffer said. "They are permitted to go ahead and do that. It doesn't mean that they won't be challenged when they do and it doesn't mean that they can do it arbitrarily. But there's nothing that has happened to date either in the governor's orders or in the rules that will stop them from doing it. That's the upshot of this appellate rule."

His office said in a statement: "The Appellate Court's failure to address the important legal issues in question has added to the confusion..."

But the lawyer leading the charge to challenge the governor said the ruling negates the governor's authority.

"That language clearly says that he himself can't do it through an executive order and I think that's important, I think people need to understand that," said Tom Devore, the attorney for the plaintiffs.

"The court really doesn't address whether the governor in all respects in all ways if he filed some different set of procedures might not be able to issue a legitimate mandate," Soffer said. "That much was not before The court and certainly isn't clear from their rule."

School districts across the state have been waiting for the ruling after weeks of tension and now, there's a bit more clarity.

The mask debate has divided school communities since the start of February. It sparked confusion as districts decided how to move forward as the governor appealed the decision.

Groups of parents and students across the city and suburbs staged protests urging their districts to change their policy to mask optional.

"Chicago Public Schools (CPS) stands by our proven COVID-19 safety mitigation measures and is pleased the Appellate Court has confirmed that the Temporary Restraining Order does not prohibit school districts from independently requiring masks, vaccinations for staff, and requiring individuals who have tested positive or have been exposed to COVID-19 to learn/work from home. Our schools will continue to enforce these policies, including mandated universal masking. These safety measures are what have allowed us to provide our students with the in-person learning environment they need throughout this school year. We will continue to follow these protocols until such time as our public health partners advise us that restrictions can be safely lifted.

"We are encouraged to see COVID-19 cases dropping, and we remain optimistic about what this will mean for our school communities in the future. Our top priority remains the safety and stability of CPS students, staff, and families."