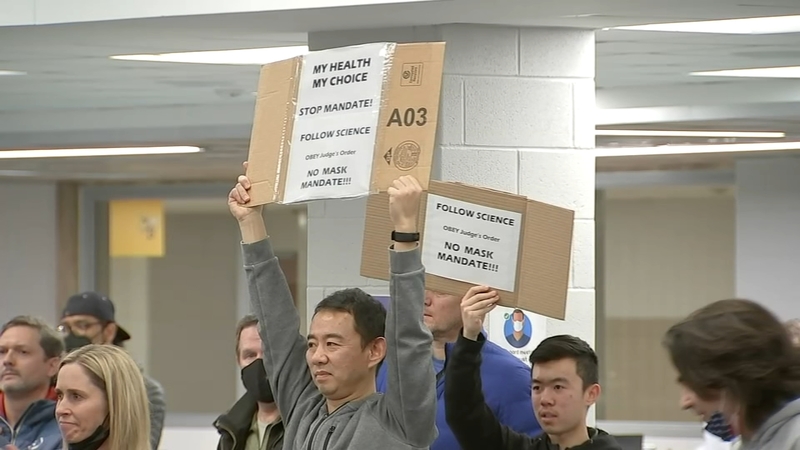 HINSDALE, Ill. (WLS) -- Parents and community members berated the Hinsdale District 86 school board for keeping their mask mandate in place at a meeting Thursday night.

"You are a dysfunctional board and should resign," said resident Roger Hempa.

Attendees masked and unmasked were face-to-face with school board members during the meeting which grew heated at times.

"I am not going to be cowered by a mob-- mob mentality," said board vice president Kathleen Hirsman as she was booed.

It's been nearly a week since a downstate judge ruled against the state's school mask mandate. The ruling is being appealed. Several districts have responded by going mask optional, but Hinsdale D86 has continued its mask requirement.

"We are exhausted from being manipulated and exploited into wearing masks. Time is up for the government and the school board mandating these masks," said student Sydney Pjesky.

RELATED: Illinois lifting mask mandate for some at end of February, Pritzker says

"I'm not scared of COVID, and many of my classmates aren't either. What I'm scared of is the emotional toll these past two years have taken on every teen in this school," said Addison Linn, student at Hinsdale Central.

The board debated whether to make a change.

In the end the board voted 5-2 to continue the mandate. Many in attendance left unhappy.