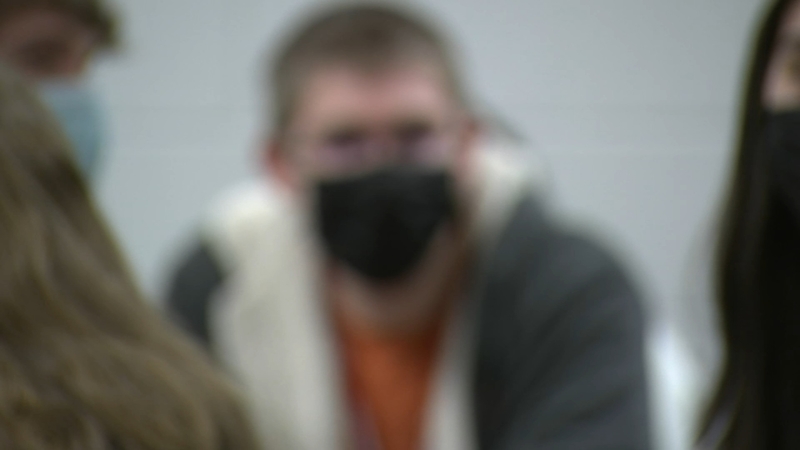 WILMETTE, Ill. (WLS) -- A group of Wilmette District 39 parents spoke out against mask mandates in schools while protesting in front of the village hall Monday morning.

About 30 to 40 people showed up hoping to send a message to the school board. They want their kids to have a choice to wear a mask or not.

A few people also came out to oppose the protesters.

"We want to give parents the choice to choose what's right for their families at this time," said Chris Beer, Wilmette protest organizer.

"A lot of us were on board early on to deal with the pandemic, but we are approaching two years and we just really think that it is time to get with the times," said Beth Feeley, Wilmette District 39 parent.

Over a week ago, a downstate judge issued a temporary restraining order against Governor JB Pritzker's mask mandate. That is being appealed.

In the meantime, protests across the city and suburbs have fired up, along with heated school board meetings over how to move forward.

Monday morning, a small group of District 39 parents showed in opposition to the protest. They are in favor of keeping masks in school for now.

"I know that our administrators and our board want an off ramp. They have communicated that in endless emails," said Kim Buckley, District 39 parent. "I want a logical, health-based offramp to come out of masks, to get back to life normal."

Administrators there said protestors had been planning to confront students.

Lockport administrators have made masks optional after witnessing tensions rising within the school community over the course of the last week.

As of Monday, masks are now optional, but recommended, at Lockport Township High School District 205. Students are allowed to make the choice for themselves. The rule change is not one that was made lightly as administrators witnessed tensions rising within the school community over the course of the last week.

"I would say it's a good start. A respectful start. A kind start. And that's obviously what we hope. And most obvious, first and foremost, we hope it's a healthy start," District 205 Supt. Bob McBride said.

According to the district's dashboard, only 21 out nearly 4,000 students are now in quarantine for either an active COVID case or an exposure. That's why the district - in the absence of any guidance from the courts or the state - decided to lift the mask requirement, even while warning it could be re-imposed should conditions change.

"We are sorting out right now, what we would do if towards the end of the week the appellate court acts and the governor acts," McBride said. "What would that mean for us in terms of enforcing any kind of future mask mandate at that level?"

"I would like to see my friends smile, cause like a lot of this has made a lot of people sad," Williams said.

As for protests in Wilmette, an online petition has gathered more than 500 signatures.