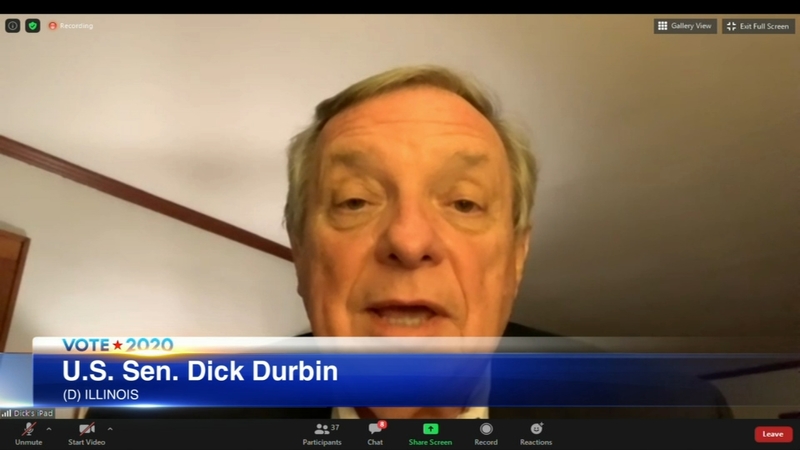 ABC News projected Durbin as the winner of the Illinois Senate race around 9:45 p.m. Tuesday

After 38 years in Congress and the last 24 in the Senate, Durbin will serve another six-year term.

Speaking into an iPad from his home in Springfield, Durbin thanked everyone who supported him as well as those who voted for another candidate.

Senator Dick Durbin gave a victory speech over Zoom after winning reelection as one of Illinois' two U.S. Senators.

"Thanks for participating in this civic endeavor called a president election," Durbin said. "Thanks for believing your vote counts and it does regardless of the outcome."

Former Lake County Sheriff Mark Curran, a Republican, and humanitarian Willie Wilson, who ran as an independent told voters it was a time for change.

As Dick Durbin fights to keep his senate seat for a 5th term, his opponents Mark Curran and Dr. Willie Wilson say it's time for change.

"He's done nothing for Illinois. He's left Illinois behind and that's why the Tribune endorsed me," Curran said.

Durbin contends it's his experience that Illinois needs now more than ever.

"Having served in the Senate and the House of Representatives, I'm in a better position to help this state, help this city through one of the most difficult times we've had in the history of this country," Durbin countered.

Wilson, a wealthy businessman who also previously ran for both Chicago Mayor and President, said he has given away $18 million worth of masks during the pandemic.

"I'm not a career politician. I'm not looking for a paycheck," Wilson said

Curran, a longtime Democrat turned Republican, was hoping to pull off the upset.