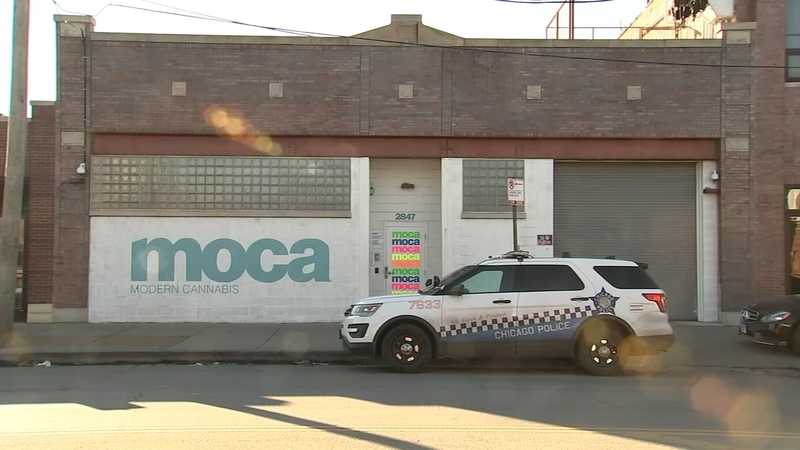 The burglary was reported at about 8:03 a.m. at a dispensary in the 2800-block of West Fullerton Avenue, police said.

Police were seen at the MOCA Modern Cannabis dispensary Monday morning. There are numerous cameras throughout the building.

Medical marijuana customers arrived to pick up their prescriptions, only to be greeted by a sign saying they are out of luck today.

"Having it closed is frustrating because I'm not sure where to get it," said Bryan Herb, patient. "So I'm in for a sleepless night."

Customers were surprised by news of the burglary, because the shop has such heavy security.

"This is more secure than Fort Knox," said Dan Harbour, customer. "They have cameras, they have armed security. I don't understand how they could get burglarized."

Because marijuana sales are legal in the state of Illinois but not on the federal level, some dispensaries may have large amount of cash on hand. It's unclear if that's what attracted the burglars to MOCA.

"It's a shame, you want to buy some stuff in a legal market and, you know, people are trying to steal stuff already," said Paul Toledo, customer.

Further details on the burglary were not immediately available.

Recreational marijuana became legal in Illinois on January 1. In the first two days of sales, nearly $5.5 million worth of marijuana was sold across the state.

Many would-be recreational customers were also out of luck Monday, but not because of the robbery. Dispensaries around the state are running low on stock after a run on sales since the law went into effect.

"I was looking to go support the state and get some tax money back into Illinois, but I guess I'll go to my normal guy," said Killian Blount, customer.

Illinois State Treasurer Michael Frerichs said he is calling on the Trump administration to change their stance on a federal law that prevents many credit card companies and banks from doing business with legal marijuana dispensaries. He said the law is outdated, and makes businesses vulnerable due to the large amounts of cash they have on hand.
Report a correction or typo
Related topics:
chicagologan squaremarijuanaburglarymedical marijuana
Copyright © 2021 WLS-TV. All Rights Reserved.
More Videos
From CNN Newsource affiliates
TOP STORIES