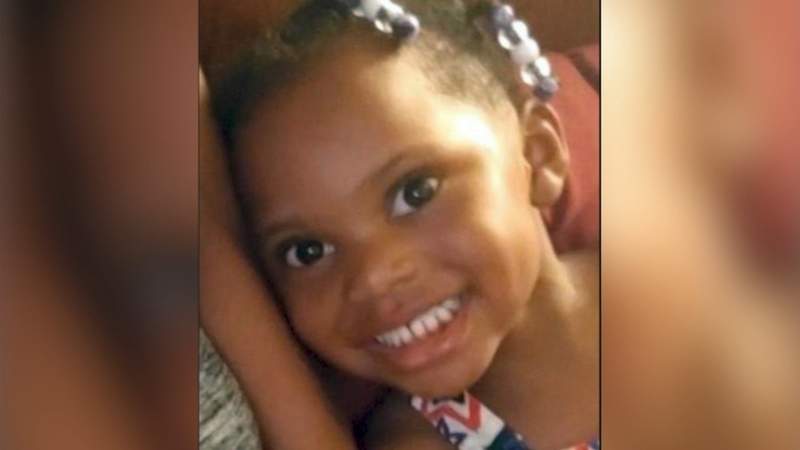 HAMMOND, Ind. (WLS) -- The FBI announced a $10,000 reward Thursday for information leading to an arrest and conviction in the murder of 2-year-old Joette 'JoJo' Malone, who died after being caught in the crossfire of a shooting at an apartment complex in July.

The girl's mother joined police, members of the FBI and the Lake County prosecutor's office as they called on the public to share any information that could help detectives.

"I do not sleep at night. I barely eat," said Ronnica Taylor, JoJo's mother. "I really wish I had my baby back, but I cannot have her back, so I really wish that someone can help me bring her justice."

The FBI announced a $10,000 reward Thursday for information leading to an arrest and conviction in the murder of 2-year-old Joette 'JoJo' Malone.

Police say a stray bullet struck JoJo in the head while she was sitting in the backseat of her mom's car at an apartment complex in the 3300-block of Craig Drive around 9:30 p.m. on July 29.

Taylor said she saw the gunman walk by at the Kennedy Crossing Apartment Complex just moments before he suddenly opened fire.

"It was really fast shots like pow, pow, pow, pow, pow, pow," she said. "I believe he let off a whole clip. I don't know what would make him do that because my car was running, the windows were down, the kids were playing loud. You can hear the kids. Why would you do that?"

The car was riddled with bullets and the back window was shot out. Police said Taylor was caught between two people shooting each other at the apartment complex.

"I grabbed her and I tried to call 911," Taylor recalled. "I dropped the phone and kept giving her CPR. My vision went out. The parking lot went black. I was yelling someone call 911."

The 2-year-old was airlifted to Comer Children's Hospital, but did not survive.

"She was trying. An average 2-year-old would not survive for that long. Seriously. They would have been gone the moment that it hit them and she survived for 30 extra minutes," Taylor said.

JoJo would have turned 3 in September. She wanted a Minnie Mouse cake, and a party, and toys. Now all her mom wants for her daughter is justice.

"You probably did not mean to. Just come forward, because it is really hurtful to know my child is gone and you are just living your life freely," she said.

"For fear of myself and my children in my home, I didn't look out the window," said a neighbor, who did not wish to be identified.