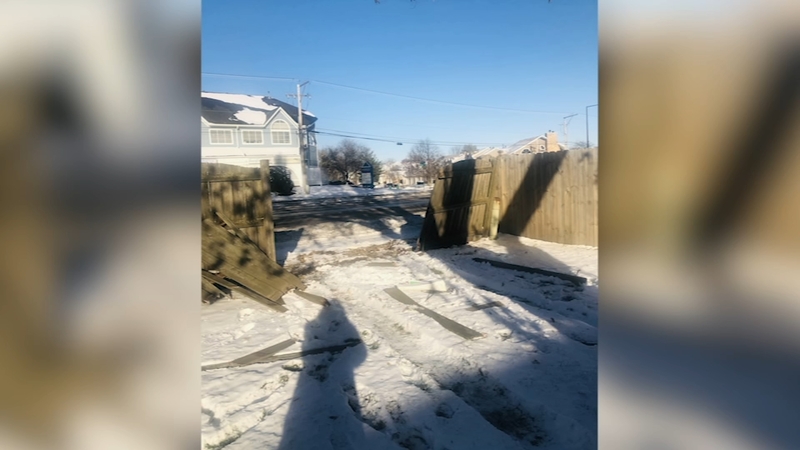 BUFFALO GROVE, Ill. (WLS) -- A Buffalo Grove couple says a driver plowed into their backyard going right through her fence.

Fortunately, that driver had insurance. But unfortunately, the woman says it was a low-cost company that would not pay out her claim.

Last November, Debbie DeMaria and her husband, David Pranno, say a driver lost control and slid right into their backyard crashing into their fence.

"All of a sudden I see headlights," Debbie said. "I'm like what the heck?"

The driver did have insurance, but it was a company the couple says they've never heard of, Unique Insurance in Niles, Illinois.

Debbie said she called her homeowner's insurance and learned she'd have to pay a $1,500 deductible. Instead of filing with her own insurance, she had them file a claim with Unique on her behalf.

"They went ahead and filed a claim on my behalf with the claim number claim number and the name of the claims adjuster so that I can keep in communication with her," Debbie said.

Debbie said she called the adjuster repeatedly and couldn't get a response.

A month later, she said they finally asked her to send them pictures and an estimate. She said she did that, but still never got a call back. The couple has a dog and couldn't wait any longer.

"With that hole, given that our backyard is on 83, it's a busy street," Debbie said. "We can't just let him out in the yard."

So they got the fence fixed, costing them about $700.

"Here we are minding our own business, a car ends up in our backyard, and we're left holding the bag," Debbie said.

"But then my wife says she got a hold of Channel 7 and so I said, maybe that might help us," David said.

The ABC7 I-Team reached out to Unique Insurance. They did not provide a statement on the record, but did reach out to Debbie the next day.

"It's funny that today was the day you chose to respond," Debbie said.

She said the company asked her to send her pictures and documents, so she sent them again and the next day, the couple received a check for $640.

I would call Sam on your side, very good," David said.

"Definitely and I can't thank you enough for taking the time to help us out," Debbie said.

The ABC7 I-Team has investigated other low-cost or non-standard insurance companies, but for some customers it's an affordable option that does work for them.

Insurance experts tell ABC7 that if the at-fault driver's insurance company is avoiding you or denies your claim, you can file with your insurance and they can work to recover from the company. That's a process called "subrogation."