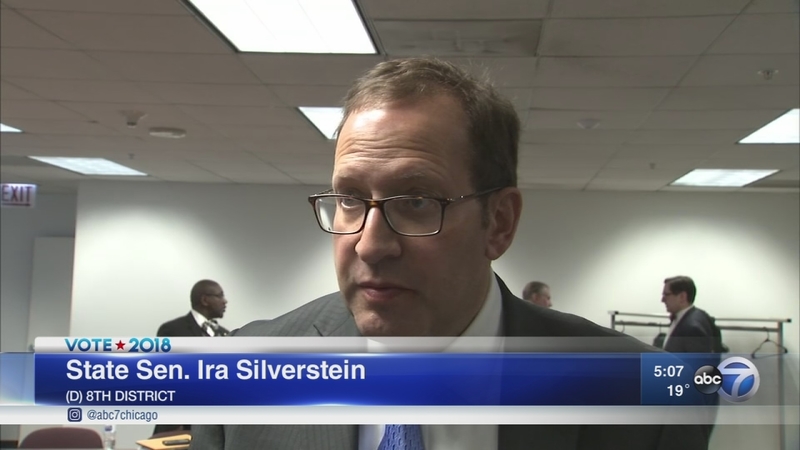 CHICAGO (WLS) -- Election officials announced Friday that State Sen. Ira Silverstein will stay on the ballot as he fights to retain his seat in this year's primary.

It was one of those most unusual ballot challenges the Chicago Board of Elections has faced.

At first, State Senator Ira Silverstein didn't have enough valid signatures to get on the ballot.

Then he did. Then the veteran lawmaker didn't.

After the back and forth, the election board finally ruled Friday that Silverstein is good to go.

He has been an Illinois state senator for 20 years, yet Ira Silverstein barely made the ballot for the March Democratic primary.

But more than half of them were thrown out by the Chicago Board of Elections after a resident in Silverstein's district challenged the validity of the signatures.

The minimum required signatures to get on the ballot is 1,000. Silverstein didn't have enough until dozens of witnesses and handwriting experts were brought in to authenticate some of the thrown out signatures. In the end, the Chicago Board of Elections ruled in Silverstein's favor.

"This came down to a candidate right at one thousand, ultimately, two to spare, I've never a case this close before," said Chicago Board of Elections Spokesman Jim Allen.

"We respected the process, we went through the process, now with my name on the ballot, we continue to election," said Sen. Silverstein.

One of Silverstein's challengers, Ram Villivalam said regardless of the harassment or ballot issues, it's time for a new generation in the 8th District. The son of Indian immigrants, Villivalam has already racked up some big endorsements.

"The ballot is set, but that's really been a side show, this campaign has always been about the need for progressive leadership for people of the 8th District," said State Senate candidate Ram Villivalam (D).

Ram Villivalam denied having anything to do with challenging Silverstein's nominating petitions.

Villivalam said his signatures were also challenged by concerned residents. Although, he said he turned in two-and-half times the amount needed.

There are no Republicans in the race.