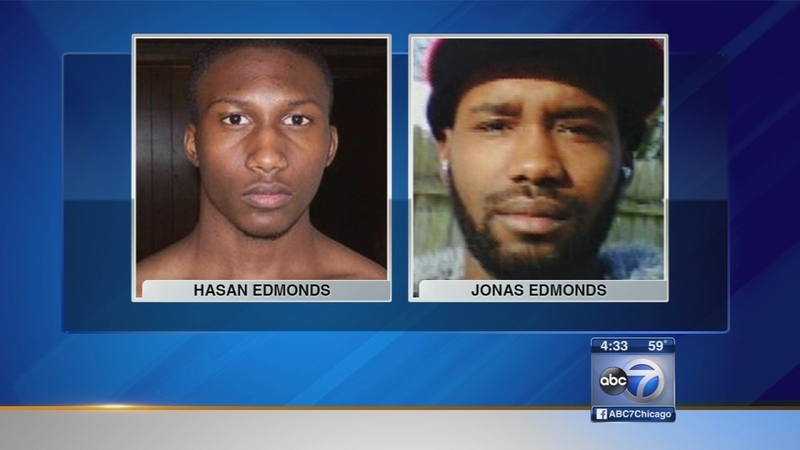 CHICAGO (WLS) -- Hasan Edmonds, a 22-year-old Illinois Army National Guardsman accused of trying to join ISIS, appeared in court Monday for a detention hearing, which was postponed until next week.

He and his cousin, 29-year-old Jonas Edmonds, were arrested on March 26. Prosecutors said the cousins planned to kill 150 people, likely targeting the Joliet armory where Hasan Edmonds was trained.

Authorities arrested Hasan Edmonds on Wednesday at Midway Airport as he was trying to get on a plane to fly to Cairo, Egypt.

Edmonds had emailed an undercover FBI agent and telling the agent he wanted to travel to the Middle East and "cause as much damage and mayhem as possible" in the U.S.

The arrests stunned Edmonds' family. Speaking publicly for the first time, Tiffany Edwards, aunt of both Hasan and Jonas, said her nephews were loyal, good, happy people and especially not the kind of people who would commit terrorist acts against their fellow countrymen.

"It's baffling. It has made it horrible for my family, especially my family in Aurora," Edwards said. "It's been real, real bad. We're not people like that."

The FBI said he planned to leave the country and allow his cousin to disguise himself in his uniform and attack the base where he has spent the last three years.

Hasan Edmonds joined the National Guard in 2011 after high school graduation. He served with the 634th Brigade Support Battalion in Joliet.

The full extent of what investigators gathered after searching the Aurora house where Edmonds lived, along with their earlier undercover work, has only partly been made public, but there is a suggestion in the captured undercover exchanges that there could be other involvement. Investigators quote Hasan saying, "Now it seems we've found some other brothers here with the same goals as ours. Still screening them, but we'll let you know."

It's all incomprehensible for family members, who knew of a religious conversion but saw no threat.

"There was nothing like this that could ever possibly come about or be true," Edwards said. "Like I said, it's a nightmare."