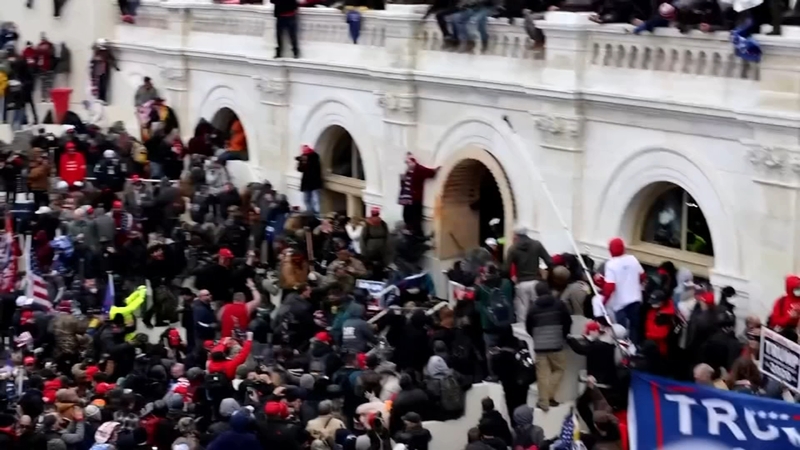 CHICAGO (WLS) -- The Justice Department has released updated numbers in what is being described as the largest criminal investigation in the DOJ's history.

This weekend marks 150 days since the January 6 attack on the U.S. Capitol, and authorities have so far arrested 465 people across the country. Investigators say there are still about 250 people wanted for assault and other violent acts.

Court data tallied by the I-Team shows that 66 people from the Midwest, including 17 from Illinois, Wisconsin and Indiana, have been arrested and charged, some with assaulting police and other violent acts.

Two downstate men are the most recent Illinois arrests. Bruce Harrison, 58, and Douglas Wangler, 53, both from the Danville area, are accused of entering a restricted government building and disorderly conduct at the Capitol.

New information from Justice officials reveals that 140 law enforcement officers were assaulted January 6, more than half from the Capitol Police Department and the balance from DC Metro police.

"I actually was astounded by these numbers. The amount of damage that was done to the capital, the number of defendants who were arrested for bringing a deadly weapon into the capital, the number of arrests," said former federal prosecutor Gil Soffer, ABC7's legal analyst. "And I think it paints a picture that was much more serious I think that many of us appreciate."

Even 150 days into the Capitol investigation, there is a long way to go. So far, 30 of those arrested have been charged with conspiracy, and Soffer believes prosecutors will ultimately be able to show there was a dual danger; some well-organized groups who showed up with an attack plan and others who road their coattails in the front door and through the windows.

"There's no question that there was some level of organization by some of these people, there are conspiracy charges," Soffer said. "So that's what a conspiracy really is. It is a level of organization, it's planning, it's an agreement to commit an unlawful act so there were people who conspired who agreed in advance of that day to come together and to do what they do."
Report a correction or typo
Related topics:
donald trumparrestdepartment of justiceus capitoli teamu.s. & worldinvestigation
Copyright © 2022 WLS-TV. All Rights Reserved.
I-TEAM
I-Team: The QR Con
75 years after Al Capone's death, it's not your dad's Chicago Outfit
34 state prisons on COVID lockdown as cases soar
Tips for tax season
TOP STORIES
Man released from prison after twin brother confesses to murder
75 years after Al Capone's death, it's not your dad's Chicago Outfit
Supreme Court Justice Stephen Breyer to retire
Scientists monitoring new omicron subvariant BA.2
Husband shares journey after losing wife in crash that killed Kobe
CPD investigating apparent Loop burglary at LensCrafters store
School Closings: Chicago Area Complete List
Show More
Death of ISP trooper, wife ruled a murder-suicide
1 dead, 38 missing after boat capsizes near Florida; 1 survivor found
Man denied heart transplant because he has not received COVID vaccine
Man falls on tracks, conductor hurt at Division Blue Line station
Chicago weather forecast includes bitter cold, dangerous temperatures
More TOP STORIES News