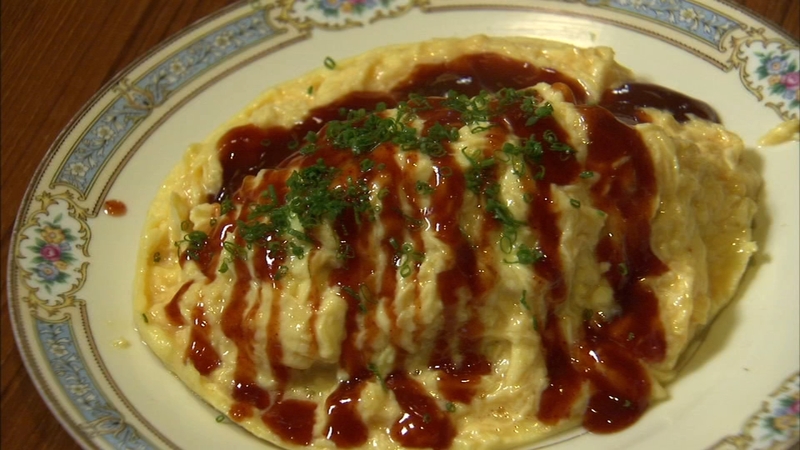 CHICAGO (WLS) -- Most Japanese restaurants in Chicago tend to focus exclusively on the sushi, but there's another aspect to Japanese dining called izakaya. They're typically pubs, serving food that pairs well with beer or sake.

In Chicago, in the basement of a well-known Japanese restaurant is one of the most unique omelets in town.

At Izakaya at Momotaro, the vibe is relaxed. Nothing precious or meticulously plated here. You might be familiar with Momotaro, that temple of fine Japanese cooking in the West Loop neighborhood, but it's the basement izakaya where the menu is more playful.

Salty, crunchy dishes are the norm, like karaage, or fried chicken.

"Karaage is something we enjoy doing with both fish and chicken here. Soy marinated chicken put in potato starch and deep-fried. We serve it with a shishito mustard, so we char shishitos in the wok, and we blend it up with Japanese mustard and vinegar," he said.

Beef tongue is seared over blazing hot binchotan charcoals, cut into tiny squares and served over creamy potato salad with a side of crispy, homemade chips.

There is fish here - a donburi bowl of seasoned rice with scattered seaweed is crowned with bite-sized cubes of fresh tuna, salmon, himachi and salmon roe... and there's just one sashimi on offer here, but do make a point to try the omurice. It begins with wagyu beef and vegetables, cooked feverishly in a hot skillet, along with fresh rice and soy. It's a standout all on its own. But then it gets even more complicated, with a perfect French omelet.

"Our Chef down here - Erik Bentz - he spent about six months giving me samples, and getting shot down repeatedly. It's the quality of the omelet and the cooking of the eggs," said Hellyar.

The omelet is placed over the rice, then immediately whisked to the table.

"The omelet itself is seamless, that's the difficult part. You don't just make a French omelet - you can't have a seam - and inside, it has to be a ball of egg with liquid in the center so when you cut it, it oozes out," he said.

Topped with a sweet-savory sauce, not unlike a Japanese A1 - over there they use ketchup, by the way - it's garnished with some finely chopped chives.

"I also love the rice on its own. The egg pairs very well; it's a pretty rich dish," said Hellyar.
"So unlike most Japanese restaurants in Chicago that tend to more hushed and focused on the sushi, izakayas are just a lot more fun. They're boisterous, they're loud and everything on the menu is designed to go with either beer, sake or whisky. Kanpai!