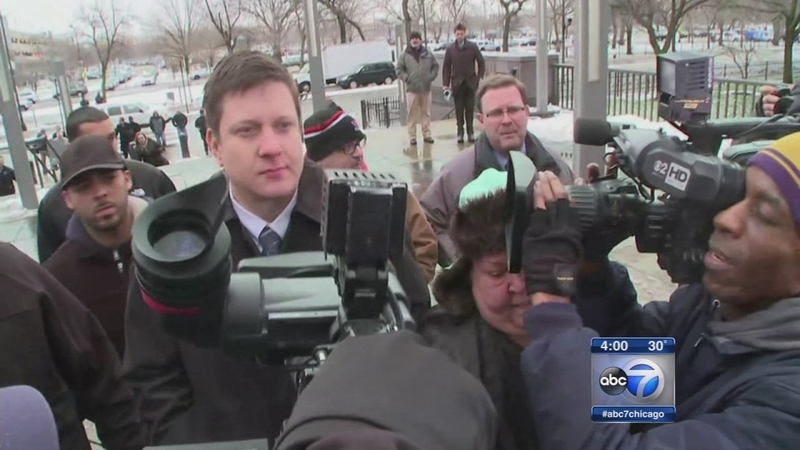 Van Dyke had no comment as he arrived at court for the arraignment Tuesday morning. He faces six counts of first-degree murder and one count of official misconduct in the shooting death of McDonald.

Van Dyke is "hanging in there," his attorney, Dan Herbert, said, and wants to tell his side of the story so he's not seen "as this cold-blooded killer."

The arraignment at Cook County Criminal Court in Chicago was supposed to happen in front of cameras, but Judge Vincent Gaughan instructed the videographer to stop recording. The court later said that was a mistake.

"This trial should be televised from gavel to gavel in the interest of fairness, to make sure that everyone that is involved is doing the job that we have either hired them to do or elected them to do, for we seek justice for Laquan McDonald," Pastor Marvin Hunter, McDonald's great uncle, said after Van Dyke's court appearance.

Herbert said cameras "should not affect my client's case in any way, shape or form."

He also said Van Dyke may pursue a change of venue for the trial.

"Change of venues, they rarely happen, especially in Cook County. But this is a case that we're certainly going to explore every possibility that we have which gives my client the best opportunity for a fair trial," Herbert said.

McDonald was shot to death in October 2014. Van Dyke, who is white, was not charged until 13 months later. A police dash cam video of the shooting shows the black teenager was shot 16 times as he walked away from officers. McDonald, a burglary suspect, had a small knife.

The release of that video in November 2015 led to public outrage and calls for reform within the Chicago Police Department. The police superintendent was fired and the U.S. Department of Justice launched an investigation into the CPD's use of force.

Hunter said he thinks there is a culture within the cook County criminal justice system and CPD "where police feel comfortable with murdering African-American people."

Over the weekend, Chicago police fatally shot a woman who was letting officers inside a home and a 19-year-old man described as "combative." Both were black. That shooting prompted Chicago Mayor Rahm Emanuel to return home from a vacation in Cuba earlier.

Protesters- who are calling for Emanuel's resignation, as well as that of Cook County State's Attorney Anita Alvarez over how the investigation was handle- are gathering at the mayor's Ravenswood home Tuesday afternoon.

Van Dyke posted the $150,000 required of his $1.5 million bail. He was suspended from the Chicago Police Department without pay. His next hearing is scheduled for January 29.