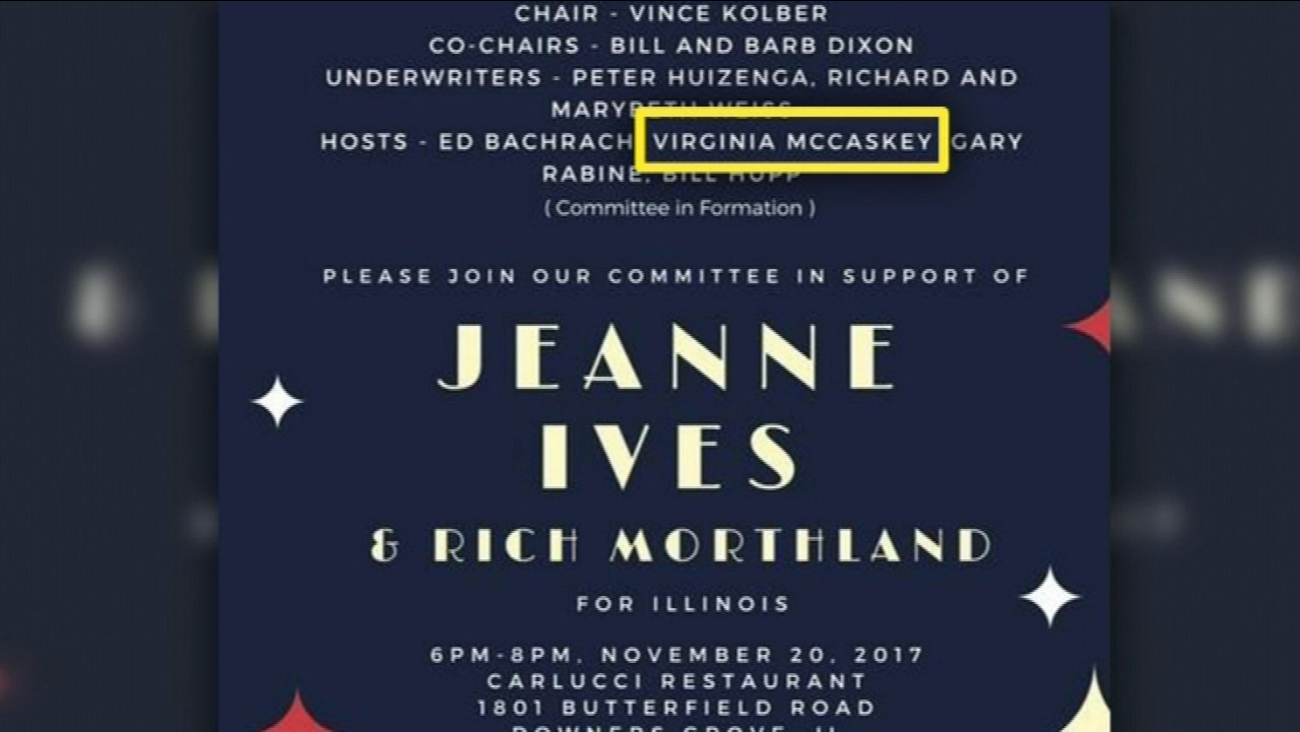 CHICAGO (WLS) -- There's some new intrigue in the race for Illinois governor as the Chicago Bears ownership family has gotten involved, but the issue of money and taxes has now put the Trump factor into play for Democrats.

As Gov. Rauner was on the second day of his "Our Home. Our Fight" statewide tour, there was word that his potential primary opponent, State Representative Jeanne Ives has secured the support of Chicago Bears family matriarch Virginia McCaskey. In a flyer advertising a fundraiser next Monday, Ives lists McCaskey as a $10,000 table host.

Democrats have tried to attack Gov. Bruce Rauner by connecting the Republican governor to President Donald Trump and that theme is part of the most recent digital ad released by JB Pritzker. But Pritzker found himself on the receiving end of the Trump tie-in, in a new digital ad by fellow democrat Daniel Biss questioning why Pritzker, like Trump, has not yet released his tax returns.

"Seven months ago JB Pritzker said he would release his tax returns. It's been seven months I have no idea it would take so long, but what I'll say is he can end the criticism by releasing them tomorrow," said Democratic candidate for governor Daniel Biss.

Pritzker's campaign said he will do so by the deadline to file nominating petitions, which is December 4.

It came as Lori Lightfoot, the head of the Chicago Police Board, announced her endorsement of Chris Kennedy. He has made an anti-violence plan part of his first TV ad campaign released Tuesday where he talked about the murder of his father Sen. Robert Kennedy.

Of course, money is going to be a major factor in this race. The candidates need it to get on TV and boost their visibility. Right now, the ones with the most money, Rauner and Pritzker, have made good use of that resource.
Report a correction or typo
Related topics:
politicsbruce raunergovernorillinoisgubernatorial race
Copyright © 2022 WLS-TV. All Rights Reserved.
TOP STORIES
Onlookers urged police to charge into TX school: 'Go in there!'
More Chicago neighborhoods, businesses want private security
Uvalde school shooting: What we know about 19 kids, 2 teachers killed
Girl, 8, found dead in Uptown home ID'd; CPD investigating
Kevin Spacey charged in UK with 4 counts of sexual assault
Aurora man who threw explosive device at Naperville police gets 1 year
Abbott slams Chicago gun laws: 'Not a real solution'
Show More
Woman uninjured after city light pole falls on car in Hyde Park
Chicago's 'Walking Man' lit on fire while sleeping on street: source
Timeline breaks down Uvalde shooter's movements day of massacre
Best, worst times to travel this Chicago Memorial Day weekend
Mayoral candidate Wilson giving away gas discounts to seniors
More TOP STORIES News