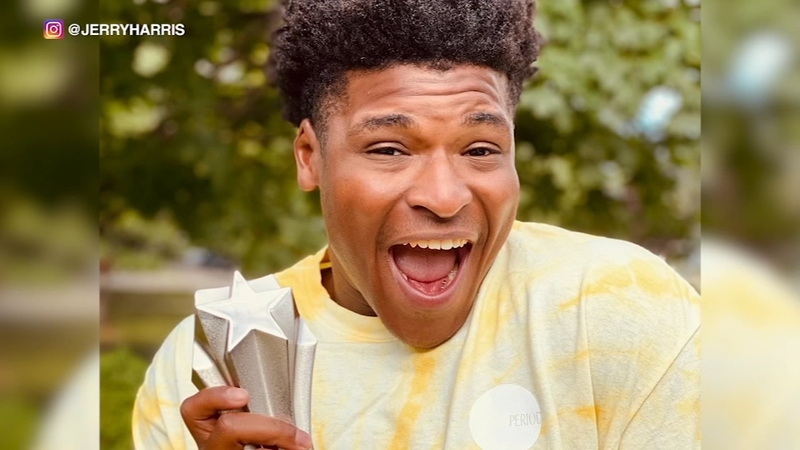 CHICAGO (WLS) -- Netflix "Cheer" star Jerry Harris of Naperville has been charged with child pornography Thursday after prosecutors said he enticed an underage boy to produce sexually explicit videos and photos of himself.

Harris, 21, has been charged with one count of producing child pornography, the U.S. Attorney's Office for the Northern District of Illinois said. He was arrested Thursday morning ahead of a court appearance Thursday afternoon.

Prosecutors said Harris contacted twin 13-year-old boys using social media and then enticed the victims to produce the sexually explicit videos and photos and send them back to Harris. According to a criminal complaint, the boys told Harris during their initial encounters that they were 13 years old.

According to court documents, Harris allegedly sent texts attempted "to make Plaintiffs meet Harris in secluded locations at various competitions," like one sent to one of the twins that read, "Hey btw I found a place for us to do stuff it's actually pretty good."

Investigators said Harris started contacting the boys in 2018 and continues for more than a year.

"We're going to be really looking at who knew what when," said Sarah Klein, attorney for the alleged victims, told Good Morning America.

During Thursday's court appearance, prosecutors said Harris is a danger to the community and are asking he be held without bond. He remains in custody pending a detention hearing Monday morning where he is expected to appear in person.

Earlier this week, the FBI raided a home in Naperville reported to belong to Harris. The raid came after USA Today reported on the allegations against Harris.

A spokesperson for Harris issued a statement Tuesday to ABC News in response to the USA Today story denying that the star solicited sex and sexually explicit photographs from minors.

"We categorically dispute the claims made against Jerry Harris, which are alleged to have occurred when he was a teenager," the spokesperson said. "When the investigation is completed the true facts will be revealed."

Netflix released a statement Thursday afternoon, saying, "Like everyone we are shocked by this news. Any abuse of minors is a terrible crime and we respect the legal process."

After the charges were announced Thursday, the attorney Sarah Klein of Manly, Stewart & Finaldi released a statement saying, "We are grateful that the U.S. Attorney and the FBI have taken swift action to protect children by investigating, arresting and charging Jerry Harris. This was made possible because our clients' mother had the courage to report Harris to the FBI as well as the Fort Worth Police Department and provided evidentiary proof of the manipulation, sexual harassment, abuse, and exploitation that her sons had suffered. We urge the authorities to undertake a thorough investigation of the United States All Star Federation, Varsity Spirit, and Cheer Athletics to determine which of their executives, employees, and representatives could have stopped Harris' abuse and failed to do so."
Report a correction or typo
Related topics:
napervillecelebrity arrestcelebrityentertainmentchild pornographynetflixfbi
Copyright © 2022 WLS-TV. All Rights Reserved.
TOP STORIES
Man loses both legs after Michigan Ave. hit-and-run
Horse 'close to death' after 8-mile Dan Ryan ride now recovering
Woman found screaming in abandoned Far South Side house, neighbor says
Feds recorded Madigan learning about secret payments, records show
MLB suspends slugger for 'Jackie' remark toward White Sox's Anderson
Plan to build Bally's casino in River West moves forward
Man gets $14.25M after 20 years in prison for murders he didn't commit
Show More
City hosts youth summit to address violence
15-year-old boy killed in Gary shooting, police say
CPS school integrates Asian American history into curriculum
Man shot, killed on train; police release photos of suspected gunman
Illinoisan Leah Marlene places 3rd in American Idol
More TOP STORIES News