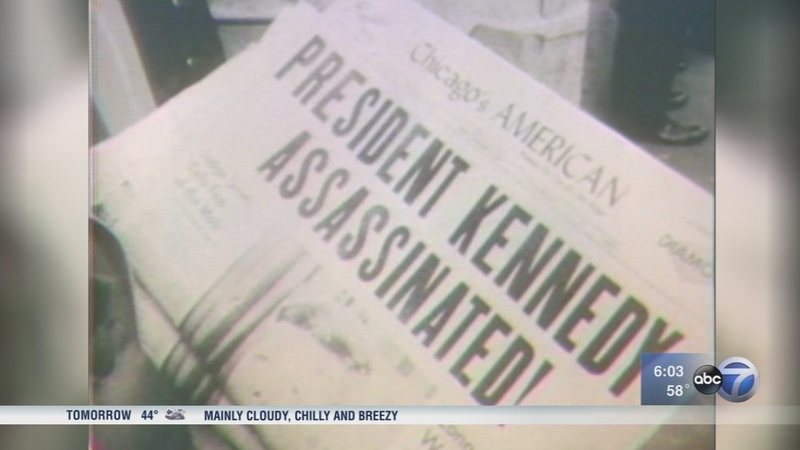 CHICAGO (WLS) -- Eight hours after thousands of files on the assassination of President John F. Kennedy were to be released by the National Archives, the White House has decided to keep some of the information from the public.

Two thousand-eight hundred records will be released shortly, but after consultations with national intelligence officials President Trump has ordered some documents to be withheld because they could "bring harm" to the military, law enforcement and foreign relations, according to senior White House officials.

President Trump late Thursday issued a memo to heads of executive departments certifying declassification of records related to JFK assassination "so that the people may finally" be fully informed. The president is asking agencies to take the next 180 days to re-review whether those documents really need to be redacted or withheld.

The ABC7 I-Team will review newly declassified records for information about the Chicago mob's potential involvement in plots to assassinate JFK. As the I-Team reported four years ago, there were secret plans to kill JFK in Chicago just weeks before he was murdered in Dallas.

The I-Team has discovered not just one, but two plots to cut down JFK in Chicago in early November 1963, and an intriguing backstory of bungling by the government agencies protecting him.

As Chicagoans watched storefront TVs and picked up newspapers of the day, there was one storyline almost no one knew a story still evolving five decades later: evidence that President Kennedy was to be targeted here in Chicago.

"The assassination was supposed to take place during the motorcade that was scheduled to come in from O'Hare Airport," said Abraham Bolden, JFK Secret Service Agent.

According to this Chicagoan and former JFK bodyguard-- and from these FBI and Secret Service reports obtained by the I-Team -- it is clear there were two plans by different groups intent on killing the president in Chicago weeks before Dallas.

In October 1963, the White House had publicly announced JFK'S plans to fly into Chicago on November 2. He was to land at O'Hare, as he had many times, would be greeted by Mayor Daley as usual, and would attend an Army-Air Force football game at Soldier Field.

Records reveal one Chicago plot had been developed by radical Cuban exile Homer Echevarria, a known smuggler of automatic weapons and machine guns.

"Echeverria had made mention that a plan was underway to assassinate President Kennedy and it was going to be successful. 'We're gonna get him.' That's what he said," said Bolden.

Bolden says Echevarria told a Secret Service informant that his group would "take care of Kennedy." In a boarding house just off the highway from O'Hare and linked to Echavarria, authorities found high powered rifles, ammo and Kennedy motorcade maps.

But then, according to Agent Bolden, FBI officials-- jealous of the Secret Service getting all the glory-- undermined the Cuban investigation.

The Cubans disappeared, just as a second Chicago plot surfaced.

At this intersection, a right wing radical under surveillance for publicly threatening Kennedy was arrested. Ex-marine Thomas Vallee had high powered rifles and ammo in his car trunk and was en route to a job that would give him direct aim at JFK'S motorcade as it exited the expressway.

"Since the president's life was in such severe danger, that was the reason he cancelled the trip to Chicago-- the assassination threat," said Bolden.