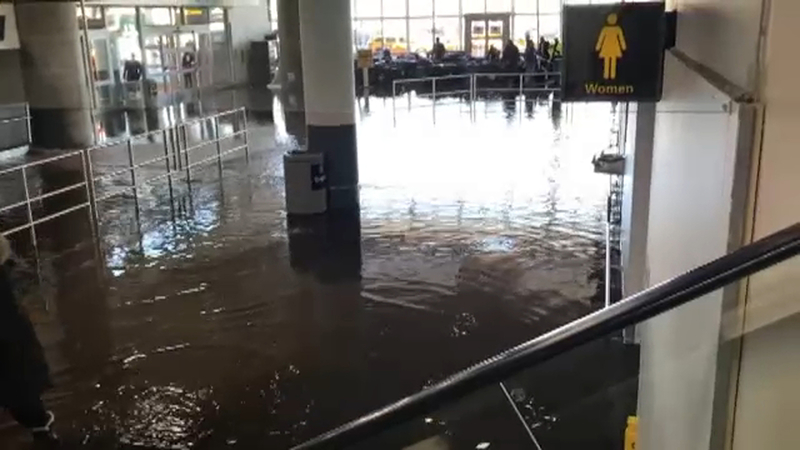 Officials ordered a partial evacuation of the terminal, the major arrival point for international travelers, according to a Sunday afternoon tweet from the airport.

Chaos at @JFKairport terminal 4 after water main break. Listen to passengers describe what happened: “It was just a madhouse. They were just like pushing people out. Nobody was moving. Everyone was confused.” pic.twitter.com/Y9CdVQcCUX

The water leak occurred at a bad time for the airport, which was jammed with frustrated travelers whose flights were delayed or canceled by the bitter cold that has gripped the East Coast. Luggage covered large sections of the airport floor as passengers waited for flights.

The temperature was around 15 degrees when the flooding started about 1:30 p.m. Video showed standing water in a large section of the terminal and water cascading down a wall in an arrival area.

The New York City Fire Department responded, but no cause of the leak has been provided. No injuries were reported.

Around 3:30 p.m., the airport announced via Twitter that international flights into Terminal 4 had been shut down. JFK advised passengers to check with their airline prior to arriving at the airport.

Delays and cancellations continue at JFK. Just heard someone say her flight is delayed 12 hours. People sleeping everywhere after being here since last night pic.twitter.com/B2N3MNdknO

The travelers were stuck at the airport because of the winter storm that socked the East Coast. On Saturday alone, 94 flights were canceled at JFK, the New York Port Authority said.
There were several hundred flight cancellations across North America and thousands of delays, according to Flight Aware, a flight tracking service.

Travelers had complained about delays and baggage problems even before the leak occurred.

Emillio Mesa traveled from Los Angeles to New York City and said he was frustrated at not seeing his luggage for 13 hours.

"The luggage pile just keeps growing," he said. "It's a fire hazard now. New flights are coming in and there's no space!" he posted on Instagram.

The New York Port Authority issued a statement saying the FAA is limiting some flights into JFK, including all flights scheduled to arrive at Terminal 1 for the rest of the evening.