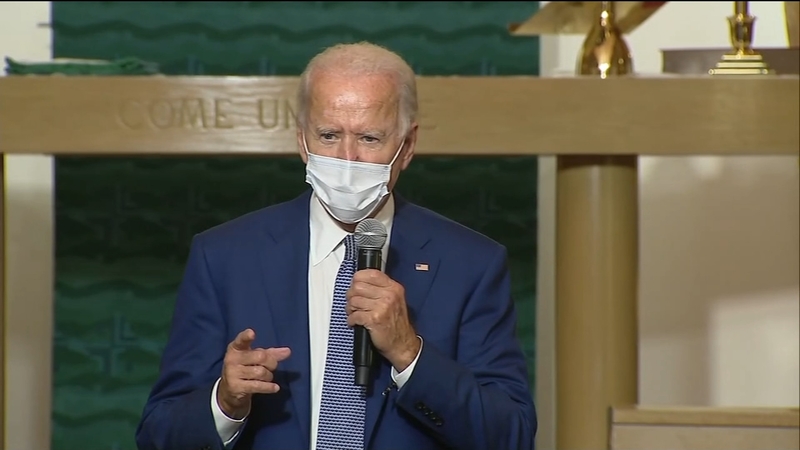 KENOSHA, Wis. (WLS) -- For the second time in two days, Kenosha has become the epicenter in the race for president.

Democratic presidential candidate and former Vice President Joe Biden arrived in Kenosha Thursday and met with Jacob Blake's family in wake of his shooting by police, which ignited several days of protests.

"This is the first chance we've had in a generation, in my view, to deal and cut another slice off institutional racism, toward getting to the place where it changes," Biden said.

Joe Biden holds a community meeting in Kenosha after meeting with members of Jacob Blake's family.

Before the former vice president's fanfare rolled into a still-recovering Kenosha, Biden quietly consoled Blake's family in a private meeting at the Milwaukee airport shortly after he arrived at 11:45 a.m.

"He spent some time together with my wife. He talked about how nothing was going to defeat him. How whether he walked again or not, he was not going to give up," Biden said.

Jacob himself called in from his hospital bed.

"My brother sounded like he really liked some of the things he spoke about and said Joe Biden was a hell of a guy," said Justin Blake, Jacob Blake's uncle.

Given Biden's personal history of loss, Blake's family said he spoke to them in familiar terms and listened.

Biden says he wants to bring to be a "positive influence" for healing in the city after days of protests and violence.

"What I came away with was the overwhelming sense of resilience and optimism that they have about the kind of response they're getting," Biden said. "His mom talked about, we asked -- my wife asked to say a prayer and his mom said a prayer. She said, 'I'm praying for Jacob and I'm praying for the policemen, as well. I'm praying that things change.'"

The Blake family said they appreciate Former Vice President Joe Biden traveling to Kenosha to meet with them.

The Blakes said they're happy to assume the role rallying support across the country for police reform and racial justice. In exchange, they're demanding results.

"It's a starting point. It sounds sincere enough," Justin Blake said. "But we're holding VP Biden, sister Kamala Harris' feet to the fire. We've heard this stuff before... We want something tangible that our community, nationwide, can stand on."

As with President Trump's visit on Tuesday, there were mixed feelings about Joe Biden's presence in Kenosha Thursday.

Outside the church where Biden was headed for a community meeting, dozens of Black Lives Matter protesters marched and stopped traffic in the street, chanting Blake's name. Justin Blake was among those demonstrating.

Inside the church, Biden did a lot of listening. He decried violent demonstrations, but said what has happened in Kenosha and elsewhere was an awakening for America.

"I honest to God believe we have an enormous opportunity - now that the screen, the curtains have been pulled back, on just what's going on in the country - to do a lot of positive things," Biden said.

Biden's visit took on a very different tone than President Trump's visit two days ago, when he met with law enforcement officers and continued with his focus on law and order. Biden promised change in Washington if he is elected.

"This generation is a different generation: the least prejudiced, the most optimistic, the best educated, the most, most, most desirable of change of any generation. So we can't let them down," Biden said.

Biden said he had received an overwhelming number of requests from local leaders to come, although earlier in the week the mayor asked both Trump and Biden to delay visits.

"We got to heal, we got to put things together, bring people together," Biden said. "So my purpose in going, will be to do just that and be a positive influence."

Wisconsin is a key swing state and Biden's visit was the first to Wisconsin by a Democratic presidential candidate in the general election since 2012.

Kenosha residents said they hope Biden's visit was more than just a campaign stunt and that he will take what he heard and make a difference in their lives, if elected.

"Yes, I do hope that he is an ally for police reform, reallocation of police funds," said Jason Lopez, a Blake Lives Matter activist from Kenosha.

"I want to send a message that we want him to go home. We don't want him here," Trump supporter Amy Dillon said.

With the presidential candidates focusing on this city this week, residents are hoping their voices and stories won't be forgotten.

"We have seen with our situations in this country it happened before another situation occurs and we forget about the one the before," Alexa Raepouncy said.

"Attention is good when is shining a light upon something, but once you shine light upon it, what do you do afterwards?" wondered Shawnelle Gross.

"Start put something on paperwork and giving to our people saying here's a contract that this is what I am going to do and I am going to make this my priority to do it," Nick Dennis said.

Kenosha has a long road ahead, rebuilding structures, policies and their sense of community.

"I think we are all grieving and trying to understand why what happened. Why it went down the way it did," Kenosha resident Ardis Mahone-Mosley said.

Blake's uncle said if Biden is elected, his family is going to hold him accountable.

"We will not be fooled, will not be played," Justin Blake said. "We are not going for the okey-dokey. We want something tangible that our community nationwide can stand on. I will not be used and thrown to the corner like other people in the past."

Just two days after President Trump made his own trip to Kenosha, he and his team slammed Biden's visit.

The president's re-election campaign releasing a statement that said, in part: "Joe Biden made this above-ground excursion from his basement for purely political reasons and it shows."

At a rally Thursday night in Pennsylvania, President Trump took credit for stopping the unrest in Kenosha.