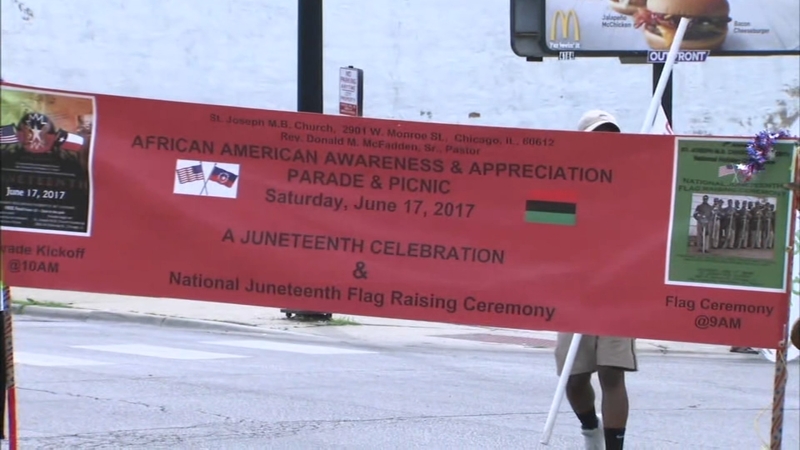 CHICAGO (WLS) -- A Chicago pastor and his South Side church are preparing to lead a coalition of groups and people of faith in a march against racism Friday.

Not only is will marchers fight to end systemic racism, but the day will also focus on healing and unity, according to Pastor Chris Harris.

"Only black people are having to deal with a pandemic called COVID and an epidemic called racism, which protects police brutality," Harris said.

Organized under the moniker of faith in justice and peace, the march steps off at noon at Roosevelt Road and Columbus Drive this Friday, June 19.

RELATED: What is Juneteenth? The history behind the holiday celebrating the end of slavery

The marchers must wear masks to participate in the event, which will end in Grant Park.

The South Side pastor said action without real change means nothing.

"If you believe that people and humanity can be better. If you believe systemic racism is wrong, come on and march with us," Harris said.

This year, in light of social and racial unrest across the country and globe, many corporations are encouraging their employees to not only have Juneteenth off to commemorate, but to use the day to do good.

"What we are asking, is for all of our corporate employees both in Canada and the United States to celebrate as a day of service, to spend the day committing to food insecurity programs, social justice organizations to learning about racial injustice and the history of African Americans," said Rashida La Lande, global general council and CSR for the Kraft Heinz company.

In the South Loop, local organizations are holding a peace and equality rally and celebration with what they expect to be a crowd of thousands. They said the march on Juneteenth is especially meaningful.
"Up until now corporations and really America as a whole did not accept Juneteenth as a national holiday," said Romel Murphy, a co-organizer of the Chicago Peace March. "It was just our holiday, our Independence Day. They concluded July 4th is everyone's Independence Day, but in reality us as black Americans our Independence Day didn't come until June 19."

"I think it's not only important to celebrate Juneteenth but also continue to fight," said Imani Simmons-Elloie, a co-organizer of the peace march. "I think we are doing a wonderful job keeping it peaceful but also reminding people why we are here, not only to celebrate but to fight for every black life that is lost."