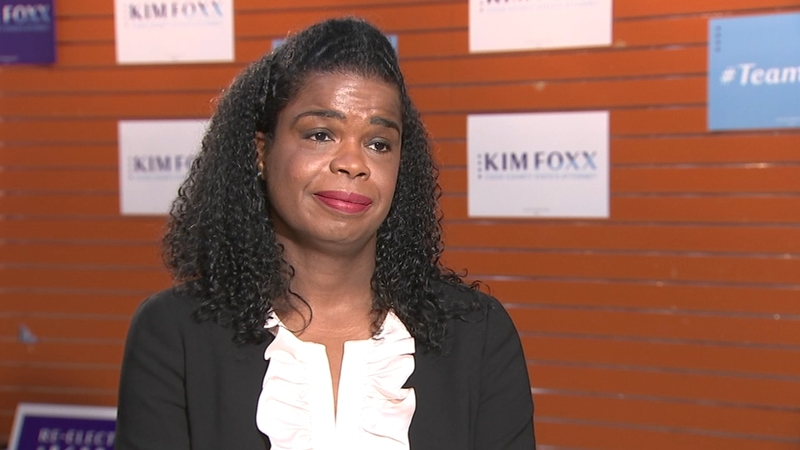 "I understand the attention that this has gotten," Foxx said. "Political opponents have spent millions of dollars at the forefront of people's mind."

A year ago Foxx's office indicted and then dropped charges against the actor. Now he's been charged again with lying about a staged hate crime.

"The exercise of second-guessing months later of how we handled one case, I'll leave it to others to do," she said.

Kim Foxx sat down with ABC7's Craig Wall for her first sit-down interview since a special prosecutor re-filed charges against actor Jussie Smollett.

Wall asked Foxx if she believes Smollett was lying or telling the truth.

"Listen, Mr. Smollett is the subject of a criminal case right now, I can't speak to the merits of that case," she replied.

When Foxx's office dropped the charges against the former "Empire" actor, they did so in exchange for community service and forfeiture of bond, but did not require him to admit guilt. If they had, would the controversy been a non-issue?

"As I've said, this case is being litigated," Foxx responded.

Last week, Foxx's campaign issued a press release calling the timing of Webb's charges "political" with the election so close, while an official statement from the State's Attorney's Office was much more tame.

When asked if she approved the campaign's message, Foxx said "I can't answer that question."

When pressed, Foxx would only say, "The statement came from our campaign."

The attack on Webb came a day after Attorney General William Barr, in an address to a sheriff's association, blasted social justice prosecutors. His speech cited Foxx indirectly.

"I do think it's absolutely chilling that we have the United States Attorney General injecting himself into local races," Foxx said.

And she doesn't think she owes Webb an apology for what her campaign said.

"Dan Webb, who's friends with Bill Barr, who on Monday talked about how I needed to go," she said. "On Tuesday this happens. Unprecedented."

Foxx also took a shot at then-police superintendent Eddie Johnson for public comments he made about the Smollett case early on.

"For a superintendent, before an indictment was ever handed down, to go for a sit-down on Good Morning America talking about evidence in a case, and no one called him out," said Foxx.

Foxx believes voters are more concerned about issues other than Smollett.

"The people of Cook County who live in neighborhoods that have been devastated by violence want us to talk about what are we going to do to make sure that communities are safe," she said.

And she pointed to other key aspects of her record.

"The vacating of wrongful convictions has been something I've been particularly proud of," Foxx said. "The work that we've done on marijuana legalization and the expungement of what will be over 100,000 records here in Cook County."