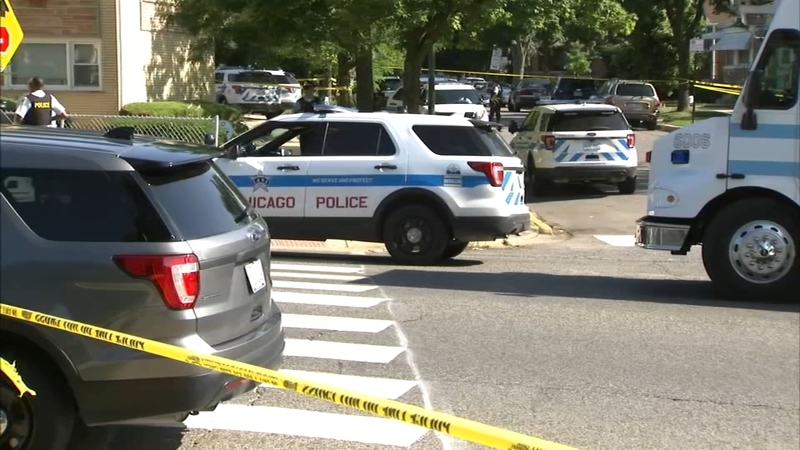 CHICAGO (WLS) -- A kidnapping suspect was shot and killed by Chicago police after an off-duty officer encountered two people in handcuffs on the Northwest Side Monday morning, police said.

At about 6:46 a.m., Chicago Police Sergeant Cindy Guerra said the off-duty officer encountered a male victim and female victim handcuffed together saying they had been kidnapped.

The off-duty officer called police and officers responded to an apartment in the 6200-block of West Grand Avenue in the Belmont Cragin neighborhood. Guerra said there was an armed confrontation in the apartment with a 41-year-old man and an officer fired, hitting the suspect.

The suspect was transported to Illinois Masonic Hospital in critical condition, where he later died. No officers were injured. A weapon was recovered from the scene, police said.

KIDNAPPING: Police say two people were kidnapped from the suburbs and held against their will inside of an apartment in the Belmont Cragin neighborhood. They escaped. The offender was shot by police. @ABC7Chicago pic.twitter.com/6fzkFlsrtx

Police said the victims showed no obvious signs of abuse and it is not known how long they were being held. They apparently saw a chance to escape early Monday and took off running toward a nearby store. Police are not yet sure why the two people were kidnapped but said that the victims and their alleged kidnapper knew each other.

"At this time we believe that it didn't happen here, that it happened in a surrounding suburb and ended up here, but that is all I'm able to tell you at this time," Guerra said.

The alleged kidnapping happened about midnight on July 7 into July 8, according to a Facebook post from the Elgin Police Department.

The off-duty officer who encountered the handcuffed victims was not involved in the shooting, police said.

The officer involved will be placed on 30-day administrative duty.

The Chicago Office of Police Accountability responded to the shooting and said it is, "committed to conducting a full and thorough investigation."

COPA is responding to the scene of an officer involved shooting near 6242 W. Grand. We are committed to conducting a full and thorough investigation. For more information visit our website at https://t.co/LqABRQUFLE