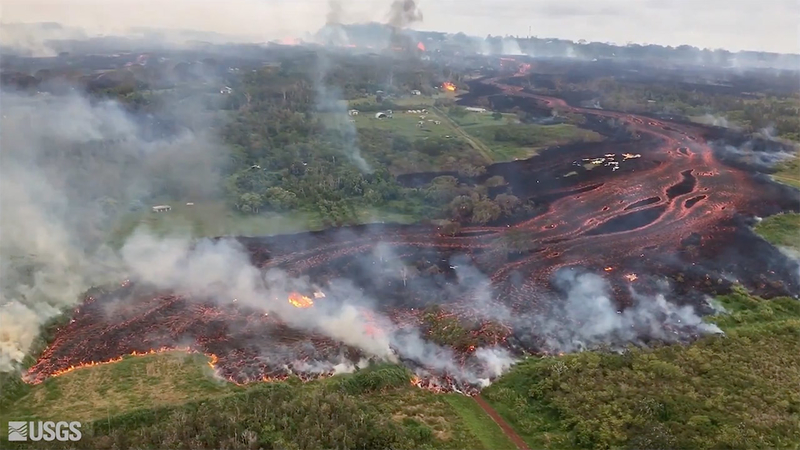 VOLCANO, Hawaii -- Arresting new footage shows lava from Hawaii's Kilauea volcano as it creeps across the Big Island, destroying everything in its path.

The helicopter footage shows fires burning and smoke rising across miles of lava-charred landscape. Just feet away from the destruction sits Hawaii's normally verdant landscape, lush with vegetation yet dangerously close to the threatening lava.

The United States Geological Survey shot the footage the morning of Saturday, May 19, in the vicinity of fissure 20. Fountaining lava is visible in the background of the shot.

USGS said activity at the fissure began to intensify on May 18. The lava is moving inconsistently and with a frequently shifting rate of flow, according to the agency.

Elsewhere, Kilauea's activity continues to threaten property. On Saturday evening, lava flows destroyed four additional homes in a neighborhood previously threatened by volcanic activity, and officials say more than 40 homes and other buildings have been destroyed by lava since the volcanic activity began weeks ago.

"We have no way of knowing whether this is really the beginning or toward the end of this eruption," Tom Shea, a volcanologist at the University of Hawaii, told the Associated Press. "We're kind of all right now in this world of uncertainty."

Experts estimate that much of the lava that has emerged thus far has been underground for decades, possibly dating back to a 1955 eruption.