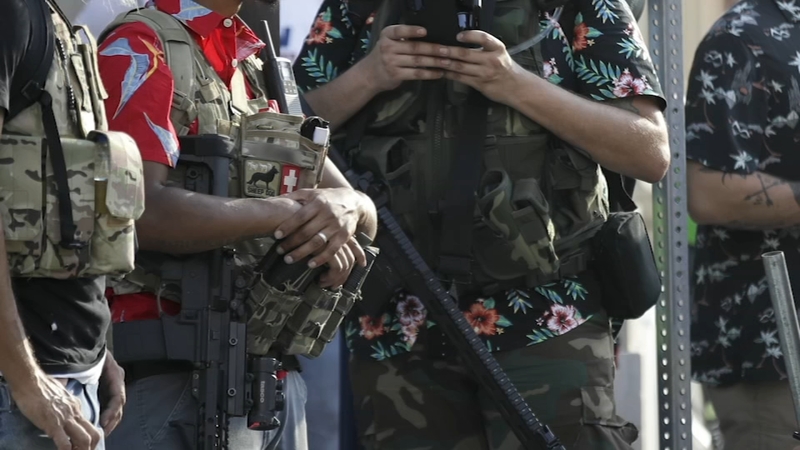 CHICAGO (WLS) -- An anti-government group known as the Boogaloo was just included in a federal lawsuit filed by the partner of one of the victims in this summer's deadly shooting in Kenosha.

The use of the Boogaloo name started as a joke online in reference to a 1980s breakdancing movie and was adopted by a loosely knit group working toward a second Civil War.

Since the spring, Boogaloo backers have been spotted at protests, heavily armed, wearing their trademark Hawaiian shirts. A new lawsuit claims a Boogaloo Facebook page promoted misinformation that may have led to Anthony Huber and Joseph Rosenbaum being killed during protests in Kenosha.

The federal complaint says Boogaloo Bois, how they sometimes are known with "boys" misspelled, is one of the self-proclaimed "militia" groups that put out a "call to arms" on Facebook to encourage violence against people protesting the police shooting of Jacob Blake.

"Social media is central to the ways in which these groups find each other in space and come together and are radicalized and mobilized, and the calls to action come over social media as well," said Cynthia Miller-Idriss, Director of the Polarization & Extremism Research & Innovation Lab at American University.

The lawsuit claims posts cited in the filing led 17-year-old Kyle Rittenhouse, who is named as a defendant in the suit, to show up armed in Kenosha. The filing says Rittenhouse, "under the tactical supervision" of defendant Ryan Balch, an "avowed member of the Boogaloo Bois," then "shot and killed two protestors with his assault rifle."

Facebook is slammed in the suit for not removing the pages sooner, when according to the plaintiffs, Facebook received more than "400 warnings" in the days before the August 25th event expressing concern that groups were "looking to intimidate and injure people..."

In a statement to the I-Team, a spokesperson for Facebook says, "We removed the shooter's Facebook and Instagram accounts and took action against organizations and content related to Kenosha. We have found no evidence that suggests the shooter followed the Kenosha Guard Page or that he was invited to the Event Page they organized."

The Tech Transparency Project has published numerous reports claiming Boogaloo is using Facebook to "plan for a militant uprising."

"They focused on the violent arm of the Boogaloo movement, and not the non-violent arm, but it's a very strange hedging of language because Boogaloo was used as a synonymous term for civil war. There is no non-violent aspect to the movement. The whole point of the movement using things like memes and jokes, is to make it seem silly and not serious but the memes are about murdering police officers," said Katie Paul, Director of the Tech Transparency Project.

In a video created by American University's Polarization and Extremism Innovation Lab in collaboration with the Bertelsmann Foundation, it explains, "The code Boogaloo is a reference to Breakin' 2: Electric Boogaloo which was widely panned for being a near exact copy of the first Breakin' movie. The term was adopted by anti-government extremists as a call to a second civil war." Miller-Idriss says the video was produced as an intervention aimed at disrupting online radicalization by Boogaloo members.

"The pandemic absolutely has been the kind of perfect storm to accelerate what I think was already growing," Miller-Idriss told the I-Team.

Javed Ali has more than 20 years of experience in national security and government intelligence.

"There's nothing illegal about being highly radicalized or having some of these, we would consider, some dangerous ideas in their heads or even shared between members. So, this is a real challenge on the detection and then disruption perspective," said Ali, the Towsley Policymaker in Residence at the University of Michigan's Ford School of Public Policy.

Authorities say some members have taken action. A number of people associated with the Boogaloo have been arrested during the last six months, including two California men charged in the death of a federal security officer. Both have pleaded not guilty.

"This is a long term challenge that is going to have to generate some new paradigms for law enforcement and the intelligence community to work together to get ahead of this," Ali told the I-Team.

"We're in a volatile moment, a real volatile mix, and you add those heavily armed individuals," said Miller-Idriss, "it's just a very dangerous situation."

One Boogaloo member who did not want to be identified told the I-Team the group "represents people who at their very core believe that all men are created equal and deserve to be treated equally." He went on to say, "There's a lot of misinformation going on about us, especially considering the fact that we're not an organized group. The Boogaloo name is more of a banner you pick up when you feel disenfranchised and lied to about the government, not some organized militia as a lot of people envision us as."