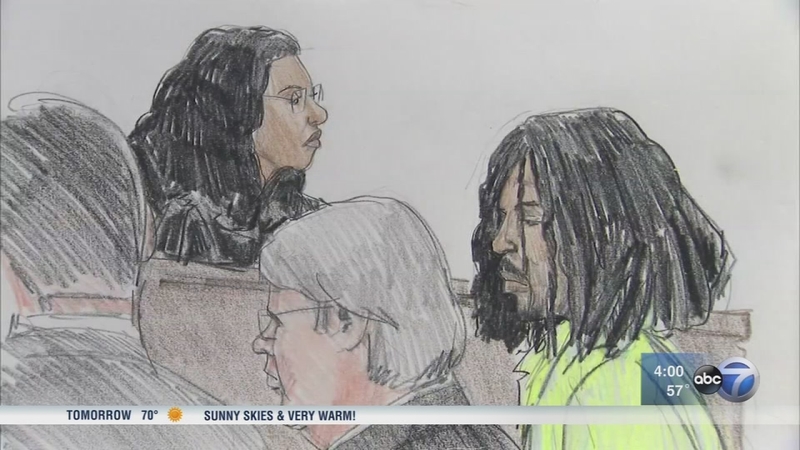 CHICAGO (WLS) -- A judge denied bond Wednesday for a Rockford man charged in the murder of a 2-year-old boy whose remains were found in the Garfield Park lagoon on Chicago's West Side in 2015.

Chicago police said Tuesday an arrest had been made in the murder and decapitation of 2-year-old Kyrian Knox, whose remains were found in the Garfield Park lagoon a year ago.

The judge said in court Wednesday that Kamel Harris, 41, was a danger to himself and society. Police said Harris did not confess to investigators, but did tell others that he snapped and killed Kyrian Knox and then tried to conceal the crime by dismembering and disposing of the body.

"Kamel Harris admitted to taking Kyrian's body to Chicago, and that he dismembered the little boy's body because he believed the body could not be identified if the head was missing," said Cook County Assistant State's Attorney Jamie Santini.

Police said Harris killed Knox because he was frustrated by the baby's crying. The baby was lactose intolerant and became agitated after having some milk.

"The baby ingested some milk. The baby was lactose intolerant. He kept crying all afternoon and he just snapped and couldn't deal with it anymore," said Cmdr. Kevin Duffin, Chicago Police Department.

Prosecutors said Harris told third party witnesses that he killed Knox in Rockford, then drove his lifeless body to Chicago to get rid of it. Investigators said the boy's blood was found in Harris's car. Knox's mother had left him in the care of Harris while she prepared for a move to Iowa for a new job. Harris told a witness the toddler's mother did not give him enough money to look after him.

"Kamel Harris told that witness that he snapped and the next thing he knew, the little boy was on the ground not responding," Santini said.

While Harris made third party admission to witnesses, he has never cooperated with police, making the year-long investigation a difficult one. And because Knox's torso has never been found, investigators still don't know how he died.

By phone, Knox's grandmother told ABC7 Eyewitness News that it was only a matter of time before Harris was charged.

Harris was charged with first-degree murder. The reason Harris was charged in Cook County, instead of in Rockford where the murder allegedly happened, is because most of the evidence was discovered by CPD investigators.

Once that evidence was linked to Harris, investigators didn't have to look far to find him. He was already in Winnebago County Jail on charges of aggravated battery of a DCFS worker. Harris is now being held at Cook County Jail.

We promised we'd never give up on him and we havent. CPD detectives made an arrest in the murder & decapitation of 2 yr old Kyrian Knox pic.twitter.com/i7Ivyocdd2

Kyrian's family said they had mixed emotions after finding out charges had been filed.

"Yesterday marked the one-year anniversary of the date that we had his memorial service. This just puts it back in the forefront all over again. I'm just grateful, happy that the detectives did their part," Cameshia Harris said.

A man charged in the murder of a 2-year-old boy whose remains were found in the Garfield Park lagoon on Chicago's West Side heads to court Wednesday.